The Wheel of Life

The Wheel of Life is the first of the great Archetypes. It expresses the All in the simplest of geometric forms—Source and the expression of the Source, heart and mind, wisdom and intelligence, spirit and matter, radiant energy and circular energy, force and form, essence and container, time and space, process of life and form of life, circle and cycle, infinite and finite, eternal and temporal. Moreover, it is the symbol of the Sun, emblematic of Light, referred to in various wisdom traditions as the First-Born of God—the Divine Love or Goodness that manifests the unmanifest Good (God).

Time and Space: Process and Form

Time and space are two aspects of the same thing, polarities to each other. Time is associated with the process of life; space with the form of life. The one is contained in the other. The one inspires, energises and motivates; the other enables, feels and responds. Together they produce consciousness.

Life manifests within an endless series of time cycles. The end of one cycle is the beginning of the next, and within every cycle a process of life takes place, each with recognisable stages. These stages are four in number—a trinity of three stages issuing from an initial one. All cycles of time have these four major stages or quarters.

In our lives the most obvious example is the annual cycle with its four seasons. Out of winter come spring, summer and autumn, with each season having its own particular purpose. Winter is primarily the season of rest and preparation for renewed life, when the seed lies dormant in the ground. It is also the time of germination, the birth or first beginnings of a new expression of life. With the dawning of spring, buds and green shoots burst from the darkness of the mother plant or earth into the light of day, to come into full flowering in the summer. With autumn comes the fruit, within which lie the seeds of new growth, of new life, to be sown into the ground with the coming of the next winter. Each year begins with birth and ends with death, and out of that death is born the next new year, all in perfect order. The same law and process applies whether the cycle is an annual one or a shorter or longer one.

In human life, the cycle that repeats itself over and over again is that of impulse-desire-thought-action. Underlying every human action is some kind of thought, whether conscious or subconscious, and underlying every thought is a desire. The desire proceeds from some kind of initial impulse, either internal or external.

Before doing anything, we have first to want to do it. That desire is our energising force, our motivation or e-motion. Emotion is not identical with feelings, which comprise our sensitivity and reactions to emotion. Emotion, or desire, is our motivating force—our will and energy. Every desire or emotion leads to a thought, in which we perceive what we want and plan our action. Finally, we put the thought into action.

These three phases of desire, thought and action express the Trinity, the fundamental law of life. If we add to the three the originating impulse, we have four stages. This cycle repeats itself constantly, from the most mundane actions to the most important.

At the end of a complete cycle of impulse, desire, thought and action, the knowledge based upon our experience will feed into the next impulse. This knowledge is the seed from which will spring the next desire, thought and action. By using our knowledge and awareness we can grow better at living and learn to avoid repeating our mistakes. As we benefit from our knowledge, we not only evolve further but also the evolutionary process increasingly speeds up.

Once we make a decision to live as good and loving a life as possible, we enter the path of initiation that leads to illumination. From the initial impulse, our desire becomes loving, our thought becomes understanding and our action becomes service, or love in action. This results in a particular knowledge of love based on the experience. Such knowledge is truth, for love is truth, and accompanying such knowledge is joy. Both the knowledge and the joy comprise light, illumining our minds and shining from us, lighting up our eyes, shining through our faces and creating a halo round our heads. Ultimately, we create a complete body of light, the immortalised aspect of our soul.

The four seasons and the four stages of the life-process are related to the four alchemical elements, earth, water, air and fire. The earth refers to the beginning stage, the season of winter and of the first impulse born in the darkness of matter. Spring, and the emotions, are symbolised by water. Summertime and thoughts are related to the air; and autumn, the time of action, is symbolised by fire.

For instance, a simple and clear example of the four alchemical elements and their sequence is contained in a lighted candle. Under the influence of heat derived from the lighted wick, the cold hard wax (earth) of the candle melts to form a liquid (water). The liquid then vaporises, and the vapour (air) subsequently bursts into flame (fire). Within the flame and shining from it is light, the quintessence or fifth element.

Moreover, whereas the lit candle, including the flame, is a particular and limited form, the light that shines from it is unlimited and universal, capable of shining everywhere without limit. The candle goes through transformations, in the sense of transforming from solid to liquid to vapour to flame, but the transformation of flame into light is a transmutation, for the form of light is unlimited compared to the limited form of the other four elements from which the light has been born or released.

The process of life, with its cycle of time, takes place within a form of life. All life forms exist within and are formed out of space. Just as time has its cycles, so space has its circles or horizons.

There is an intimate relationship between the cycle of time and the circle of space. For example, in the Northern Hemisphere we normally associate winter with night, cold and darkness, qualities associated with the north. We link spring with the morning and therefore with the east where the Sun rises. Summer we associate with midday and with the greatest warmth and brightness, and therefore with the south where the Sun shines most brightly and is at its greatest height in the sky. Autumn, the final season of the year, we relate to the evening and the setting Sun, and therefore with the west where the Sun sets. Midwinter is thus related to due north, midsummer to due south, the spring equinox to due east, and the autumn equinox to due west. The quarterdays are, respectively, related to the northeast, southeast, southwest and northwest.

These relationships are important, for they have a bearing on how we are affected sublimally by the effect of orientation within our horizon or circle of space.

For instance, the north is, by analogy, linked with the element earth, with birth and gestation, and with the human life impulse that begins each cycle of life. For this reason, the north gate is considered to be the gate by which we enter incarnation and by which we leave it at the end of our life span. The North Pole Star, symbolised by the six-pointed Star of David or Christ Star, is known as the Alpha and Omega, the Beginning and the End. It signifies our guiding light and the place from which we come and to which we return again after death.

As for the quarter-directions, they are associated with the quarterdays, the cherubim and the four gates to Paradise.

(In another well-known relationship of the directions with the elements, the east is associated with air, the south with fire, and the west with water; but this is for an entirely different reason than the one described here. This one, which Zoence uses, is fundamental, depicting not only the unfolding stages of both the process of life and the evolutionary path of life around the Wheel of Life but also revealing the intimate relationship between time and space and all things.) 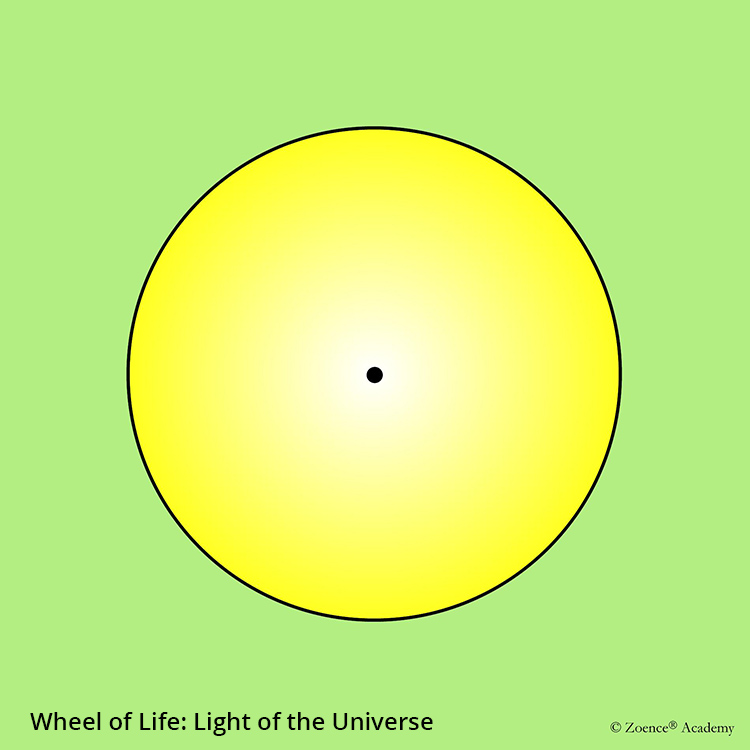 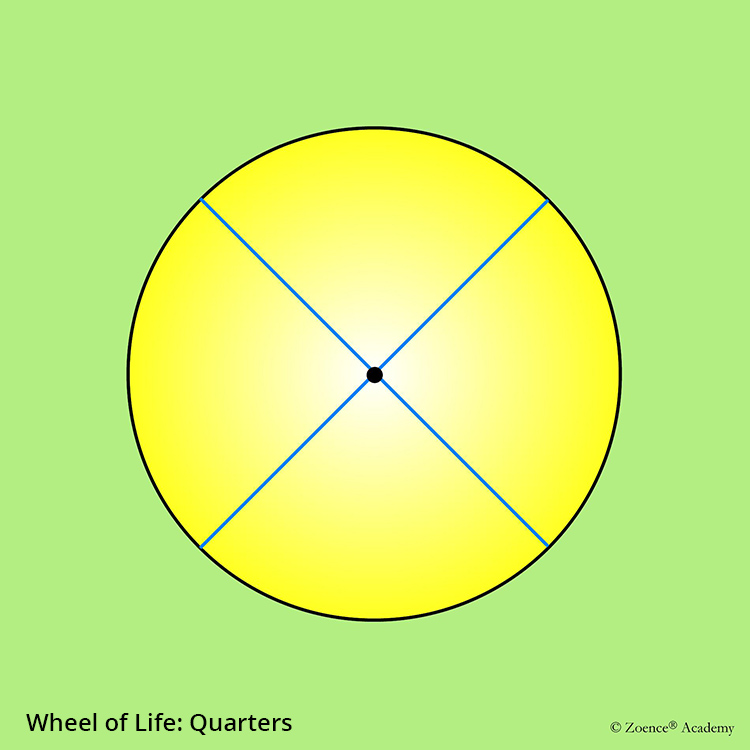 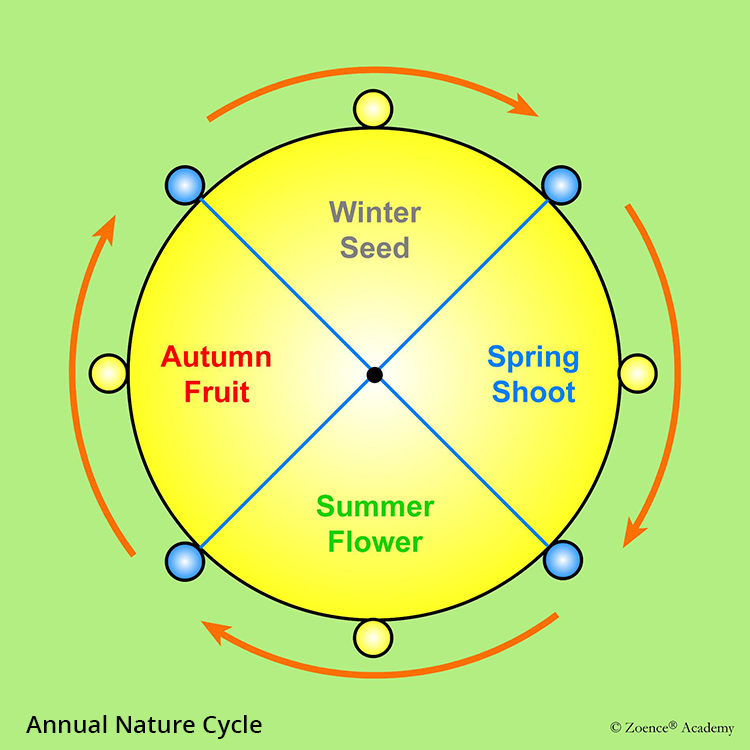 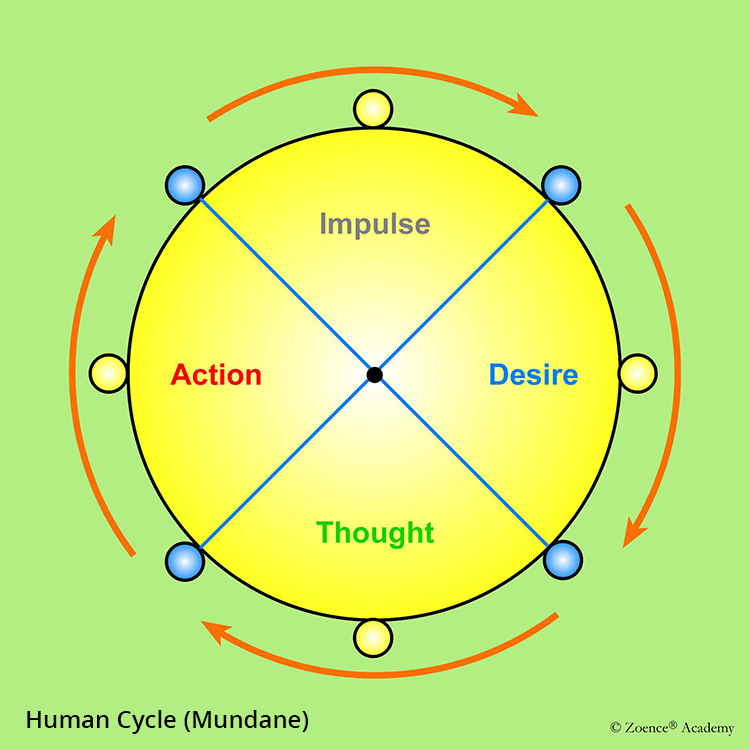 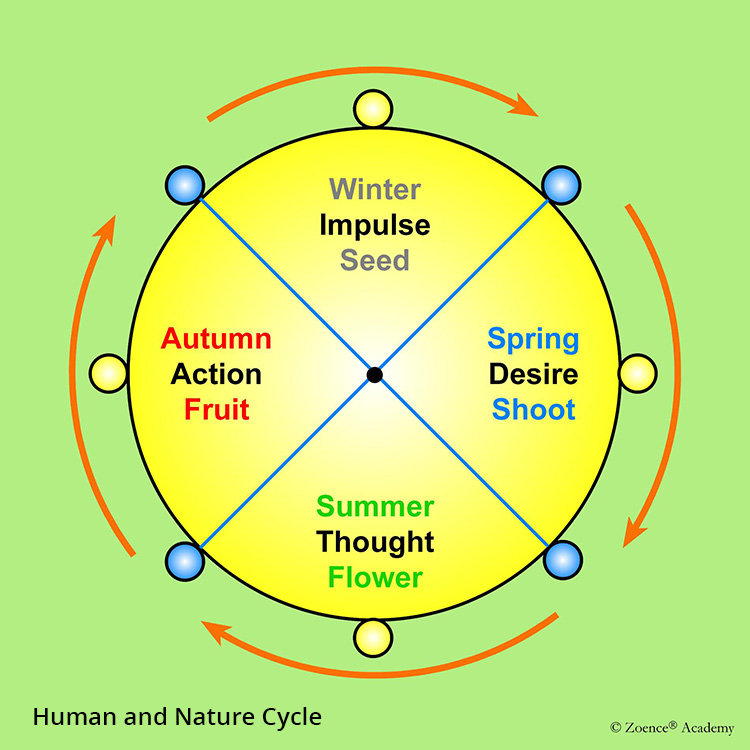 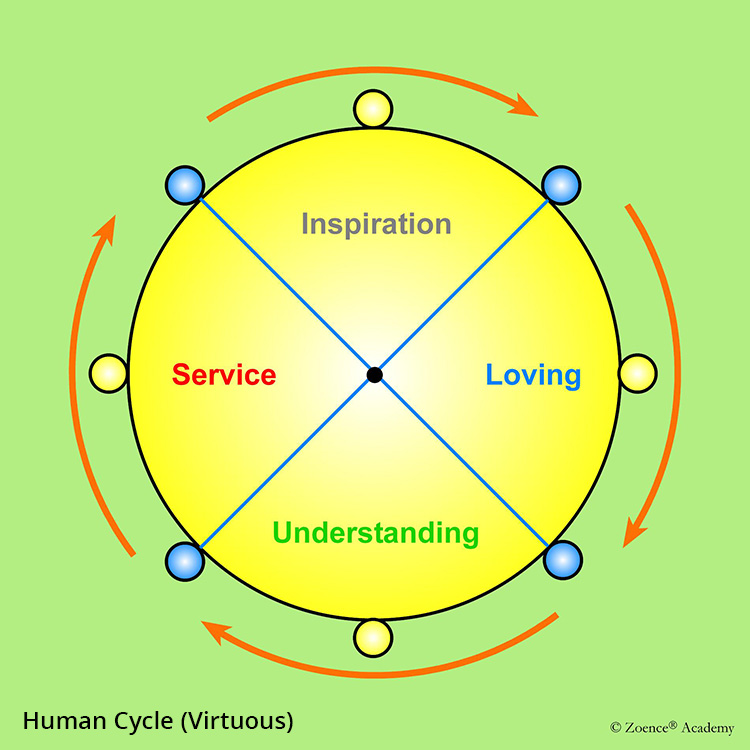 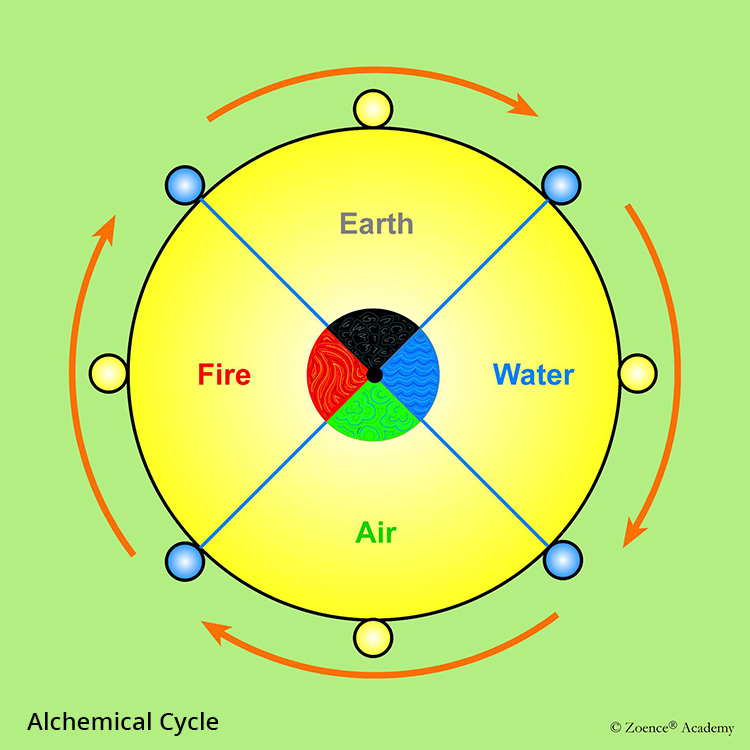 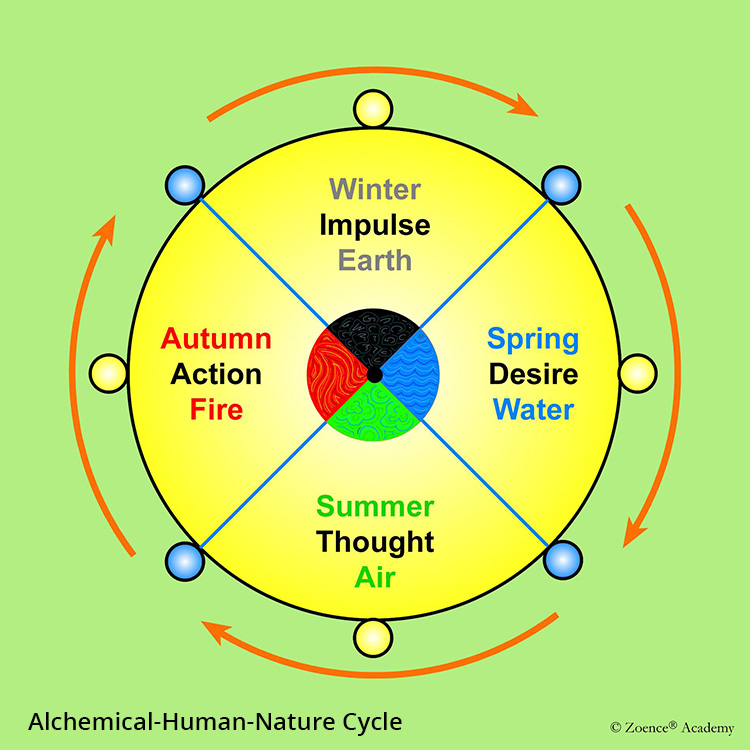 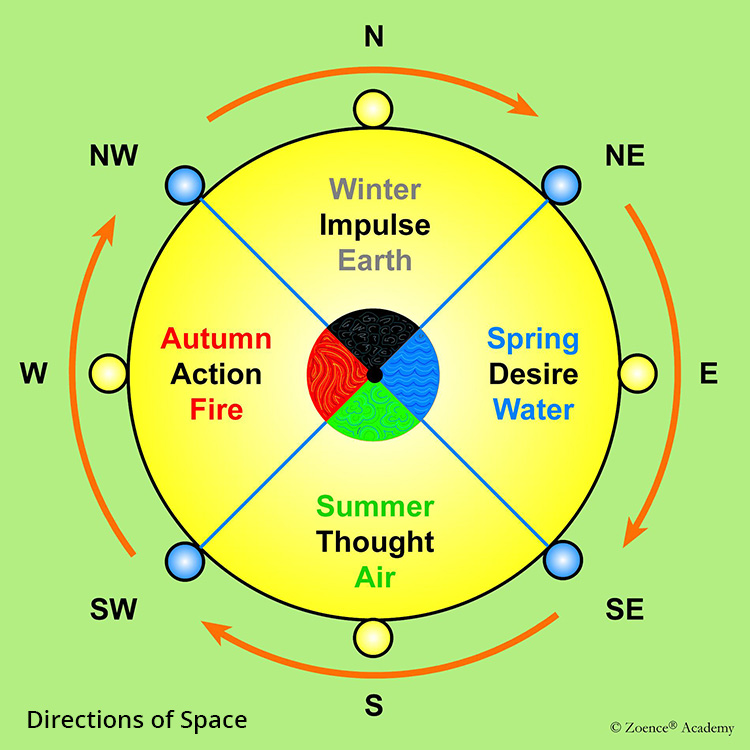 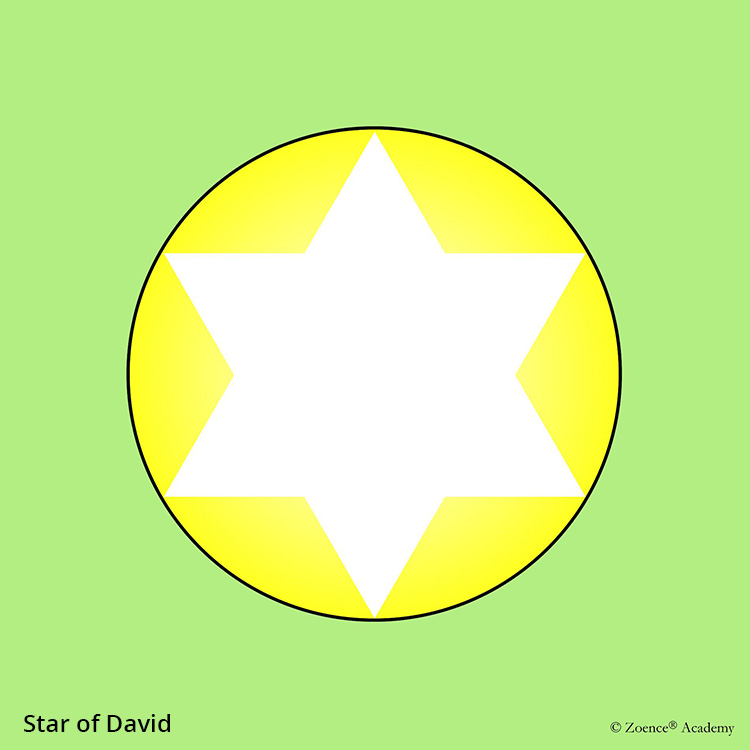 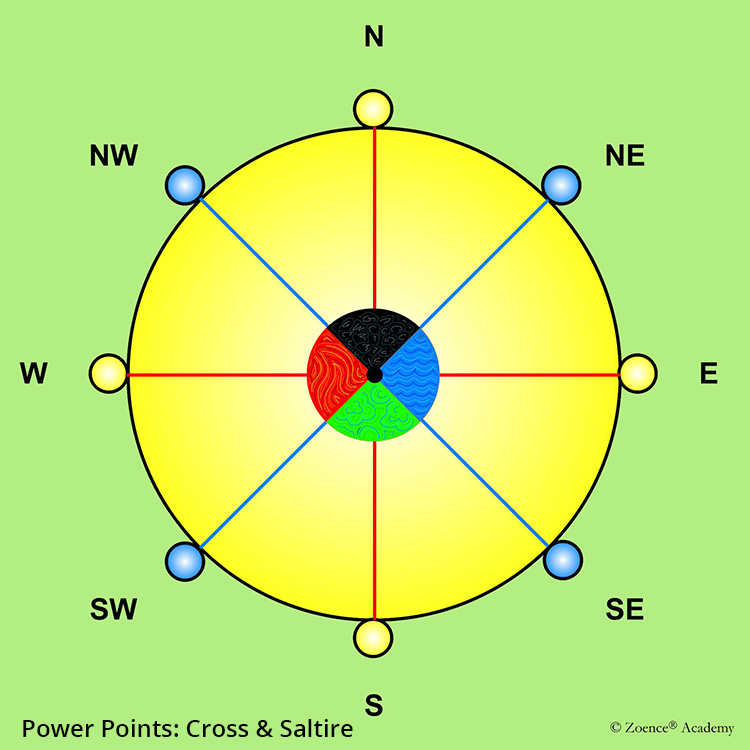