The Seven Days of Creation

In the sacred scriptures and wisdom traditions, the universe and all that is in it is said to have been created in seven ‘Days’. Since the general understanding of the nature of God is as a Love that is omnipotent, omnipresent and omniscient, existing beyond or unlimited by time and space (i.e. existing in eternity and infinity), the concept of a divine ‘Day’ such as in the biblical ‘Seven Days of Creation’ must refer to something that is not bound by time as we know it, or by any time at all. (Time as we know it is relative to our particular planet and its movement with respect to the Sun and stars.) The ‘Seven Days’ can only refer to a creative law and process of life with seven parts or stages that is eternally existing and active, and which produces such phenomena as the seven major colours of the spectrum of light and the seven major notes of an octave of sound.

Mathematically seven is the number of times that a trinity can express itself. That is to say, the Holy Trinity, described as a Trinity-in-Unity, can express itself in seven major ways. A simple example of this can be shown if we take three pens of different colours (e.g. red, blue and green), each with tops on and tied together to make a trinity-in-unity. When we write, we have to hold all three pens together. If all three tops remain on, no mark can be made on paper; but, if we remove the tops in turn, we can write in seven different colour combinations on the paper. For instance, with only one top removed at a time, the writing will be in one of the three colours. This gives three ways the pens can express themselves (i.e. in red or blue or green). If two tops are removed at a time, the writing is two-coloured, giving another three ways (i.e. red-blue, red-green and blue-green). Finally, if all three tops are removed, the writing is three-coloured, thereby providing the seventh way.

The Seven Days of Creation are described as being composed of Six Days of Work and One Day of Rest—the Work being the work of creation and the Rest being the resulting time of knowledge, illumination and joy.

On each of the Six Days of Work a creative act is accomplished, beginning with the creation of Light on the First Day. In all sacred traditions this Light is known as the First-Born of God—the first expression of the otherwise unexpressed and therefore hidden Divinity. The ancient Greek tradition describes this First-Born most fittingly as Eros (‘Love’), which is composed of Logos (‘Word’—the animating power and underlying order of the universe), Christos (‘The Anointed One’—that which is anointed by or receives the Word) and Phanes (‘Light’). In more basic terms these can be explained as the indivisible trinity of energy, matter and form, whilst in more philosophical terms they are wisdom, intelligence and beauty, and in religious terms they are Word, Breath and Light.

In the seven-day week, which is symbolic of the Seven Days of Creation, the seven days are represented symbolically by the seven heavenly bodies or ‘luminaries’ of our solar system that are visible to the naked eye. It is from the Norse, Germanic and Roman names for these luminaries and their divine archetypes (i.e. gods and goddesses) that the English names for the days of the week are largely derived:-

They are arranged in such a way that each week is paired with the next, with a double helix uniting and flowing through them, revealing the order of the seven heavens:

The two orders are also connected geometrically in the union of the circle and great heptagram (seven-pointed star). 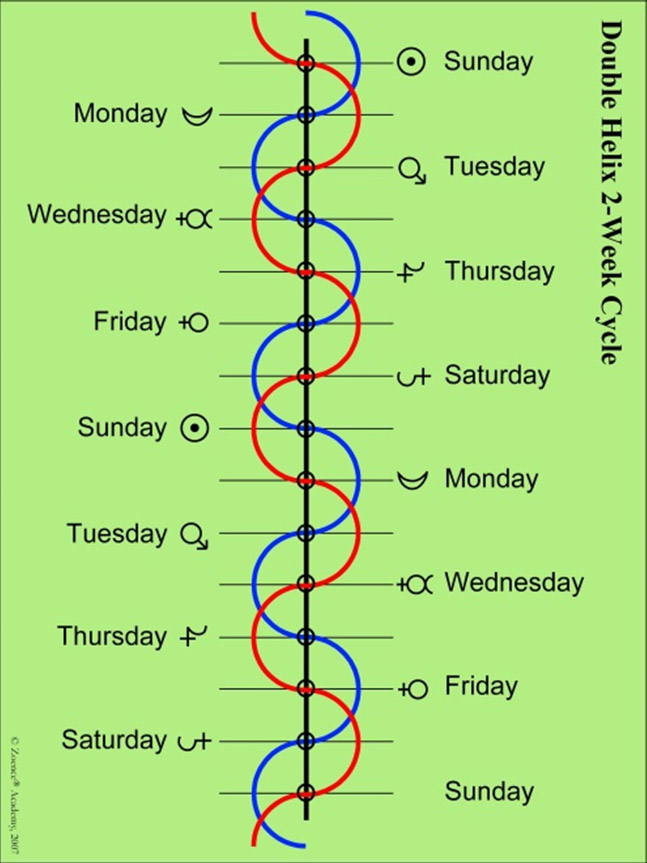 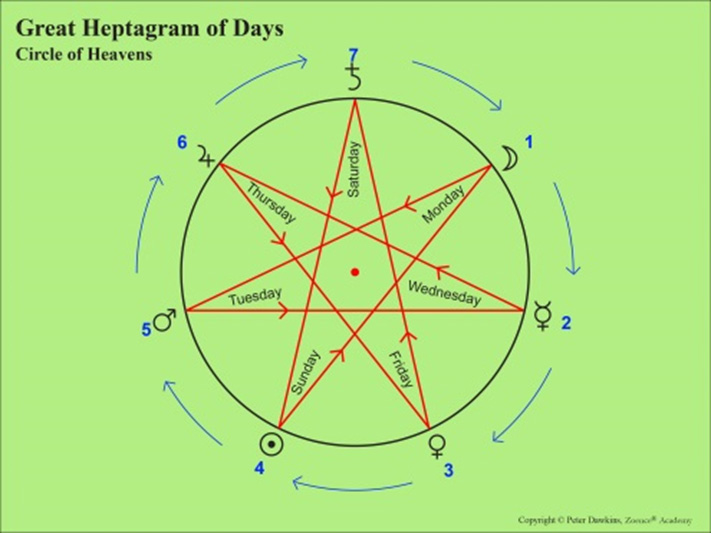