Although there is a particular body of Hermetic knowledge based on a collection of Greek texts known as the Corpus Hermeticum, which were part of a philosophical renaissance that took place around the 2nd century AD, the Hermetic wisdom is, in a wider context, a generic name for the core truths shared by the various major wisdom traditions and religions from time immemorial, believed to have been given by God to man.

The term ‘Hermetic’ is derived from the Greek word Herm, which refers to a special pillar or post used in pre-classical Greece to represent Hermes.

Hermes was revered not only as a god but also as the original god-man, the great teacher of wisdom, the messenger of God to man. He was reputed to be the son either of Zeus and Maia, the daughter of Atlas and Pleione, king and queen of Atlantis, or of Zeus and Europa, daughter of Agenor and Telephassa, king and queen of Phoenicia. As Phoenicia is another name for Atlantis, whose royal family were known as phoenixes, the two origins of Hermes given by the Greeks are in fact one and the same.

Hermes was known as ‘Trismegistus’ (‘Thrice Great’) because he was said to know the three parts of the wisdom of the whole universe: thus he was the greatest philosopher, the greatest priest and the greatest king. The three parts of the wisdom are referred to as Alchemy, Astrology, and Theurgy, which are also known as the Operation of the Sun, the Operation of the Moon and the Operation of the Stars respectively. These in turn are represented by the Three Great Pillars, known more commonly as the Pillars of Solomon, Hercules, Atlas or Enoch, which are associated symbolically with the sun, moon and stars—the sun or ‘greater light’ to rule the day, the moon or ‘lesser light’ to rule the night, and the stars also, as recounted in the first chapter of Genesis concerning the Fourth Day of Creation. All wisdom is contained in and expressed by these three, which themselves are expressions of the Holy Trinity—Wisdom (Word), Intelligence (Holy Spirit) and Power (Source). Moreover, the initiatory path, with its three basic degrees of learning to love, understand and serve, is derived from these divine Three: hence the philosopher, priest and king respectively—the philosopher who loves wisdom, the priest who understands wisdom, and the king who serves with wisdom.

The Holy Trinity is essentially a Unity, and so the three Great Pillars can also be represented by a single pillar—the Herm. This is the Middle Pillar that stands in the centre of the universe, known as the Axis Mundi about which everything revolves. It is also symbolised as the Central Mountain—Mount Atlas in classical mythology or Mount Meru in Hindu and Buddhist cosmology.

An alternative symbol for the herm is the emerald that is said to have been carried by Hermes and upon which was recorded all of philosophy. This is equivalent to Merlin’s emerald stone in Druidic lore and to Moses’ stone tablet (a star-sapphire) in Hebraic lore, upon which the divine wisdom or law of God was imprinted.

Hermes is also renowned for carrying the caduceus, which portrays the central pillar as a rod surrounded by spiralling twin serpents, the latter having the same meaning as the twin pillars that stand each side of the middle pillar. The central rod of the caduceus is, in the symbolism of the caduceus, also a serpent, but one that is raised erect, like the rod that Moses carried, which became (or was) a serpent.

The serpents of the caduceus—which are yet one serpent, reflecting the Holy Trinity—were known as Python (female) and Typhon (male). These serpents, combined as one, constituted the dragon of ignorance and vice, which Hermes vanquished by raising it up; that is to say, by raising his consciousness and whole being from ignorance and vice to knowledge and virtue—or, as said in the mystery schools, from darkness to light. Such transformation and transmutation is the alchemical process, as defined by the Wheel of Life.

Hermes was the Greek name for the Egyptian god-man Thoth, whose cult centre was at Khmun, also known as Un, a place that marks the heart centre of ancient Egypt. The Greeks renamed this city, Hermopolis. Un, meaning ‘Pure Being’, refers to the One, the Source, the Heart, the place of the Middle Pillar or Herm. Khmun, meaning ‘City of the Eight’, refers to the eight deities or aspects of divinity that represent the world and universe before creation.

The ‘Eight’ represent the three-fold unfolding polarity of things, on which cell division, for instance, is based. The One manifests as and by means of polarity, i.e. as Two; Two then becomes Four, and Four becomes Eight. From these hidden, unmanifest potentialities (powers) emerge the manifest universe, represented by the cosmology of Khmun. This was the central cosmology of the four great cosmologies of ancient Egypt—the cosmology that was the source of the other three. Its hierarchy of ten gods and goddesses, repeated in the cosmology of An (Heliopolis), the brow chakra of Egypt, is a mythologised representation of what the Hebrews later taught as the Tree of Life.

Thoth was equated with the Egyptian god Temu (Atum), who was symbolically represented by the pyramidal sacred hill or island that rises above the waters. In Egyptian cosmology Temu is the divine Creator, his name meaning both ‘All’ and ‘Nothing’; yet he is also described as the great predynastic king who was the first man to have become divine by being resurrected (i.e. raised above the waters of mortal life) in his physical body.

In rabbinical and biblical tradition Thoth is referred to as Enoch, the first human soul to complete all the initiations on the human path of evolution and thereby become the Messiah or Anointed One (i.e. the Christ). From him all our wisdom teachings are derived, and he appears to us again and again to initiate us into the mysteries of life and lead us to illumination. The Jews later referred to this wisdom as Kabbalah (‘the Received Wisdom’). Enoch is said to have inscribed the wisdom and laws of the universe upon two pillars, one of brick (associated with fire and the sun) and the other of marble (associated with water and the moon). There was also a third pillar. These are the Great Pillars referred to previously.

According to ancient Egyptian tradition, all the Egyptian wisdom teaching was derived from Thoth/Temu. He was thus known as the lord and teacher of all wisdom, learning and magic, and was credited with writing all the sacred books, represented as being 42 in total. This number of books relates to the 42 subsidiary Trees of Life that stem from the initial seven cosmic principles (i.e. Sephiroth 4-10) of the primal Tree of Life, which in turn give rise to the 42 minor chakras of the human being that stem from the seven major chakras. The 42 nomes of Egypt were patterned on this archetypal design, with each nome being associated with a book of wisdom.

In Islam, Hermes is identified with Idris, a saint and prophet whom God raised to heaven and who appears whenever some miraculous help is needed. Idris (Arabic, Idreesa) is further identified as being the same as Enoch. Idreesa is the Arabic pronunciation of Osiris (Egyptian, Wesir), the primordial, predynastic king of Egypt, whose name is interchangeable with that of his son, Horus (Egyptian, Kheru); that is to say, when Osiris the king dies, his son Horus becomes the new Osiris, and so on, ad infinitum. It is from the name Kheru that the Greek name Christos (Christ) and Latin name Mercurius (Mercury) are derived.

A further name for this great immortal-mortal soul is Atlas, king of Atlantis. This name is derived from the ancient word, Atl, meaning ‘Pillar’. Atlas' home is Mount Atlas, which rises in the centre of Atlantis—his palace and temple being located on the summit. Mount Atlas is synonymous with Mount Meru, the home of Shiva in Hindu tradition. Like Atlas, Shiva’s primary symbol, which is said to represent Shiva himself, is a stone pillar known as a lingam. That is to say, Shiva is synonymous with Atlas, who is Osiris, Thoth, Temu, Enoch, Idris, Christ, Messiah, Mercury and Hermes. They are all names in different languages for the same being, the same great teacher, and hence the same fundamental wisdom. 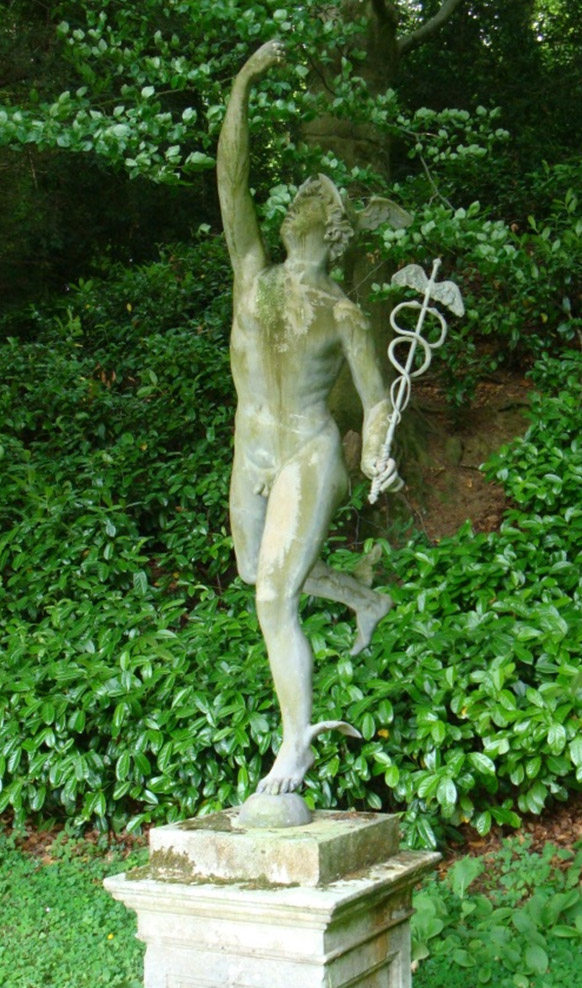