The Tree of Life

The Archetype referred to as the Tree of Life is most generally known in the form of the key diagram used in Cabala, a word that is spelt variously in Hebrew, from which it is derived, as Kabala, Kabbalah, Qabala, Qabalah, Qabbalah. The word means ‘the Received Wisdom’. It can also mean ‘the Great Knowledge’, a term used in other wisdom traditions.

The wisdom is said to have been taught first by God to a school of angels before the fall of man. After the fall God sent the archangel Raziel to teach it to Adam and Eve, so that mankind might find redemption. But it was Enoch, the great Atlantean king (otherwise known as Atlas), who became the first human soul to fully understand and successfully practice the teachings, thereby attaining the fullest state of illumination and godliness known as the Messiah (Christ), and who then became the great teacher and friend of mankind.

The geometric form of the Tree of Life is based on four intersecting circles of equal size, comprised of three circles descending (or unfolding) from the initial one, with the centre of one circle being on the circumference of the next.

The first circle represents the transcendent Absolute, the source of all. It is known as the World of Emanation. The other three circles are referred to, in descending order, as the World of Creation, the World of Formation and the World of Fact or Action. These four Worlds represent our divinity, spirit, soul and body respectively, and that of the universe, and relate to the four stages of the life-process as signified by the four quarters of the Wheel of Life.

The geometry of the Tree of Life is formed by joining the centres and intersecting points of the circles, as shown in the diagram. These centres and intersecting points signify the Ten Divine Attributes (Sephiroth, ‘Ciphers’), the fundamental principles of life which, like the ten Hindu Pragâpatis, are but One Supreme Unity. The connecting lines between them are known as pathways, numbering twenty-two in total. For a profound reason that forms part of the mystery of Cabala, or of life itself, the eleventh point, the centre of the second circle, is left unnumbered and with no pathways connecting with it.

In order to be manifest, the One appears as Three—a polarity plus the relationship between the two poles. This is the Holy Trinity, numbered 1-2-3, which is the basis of all manifestation. From the Three come the Seven, the latter signifying the seven fundamental ways that the Holy Trinity can be manifested and made known (e.g. as represented by the seven major colours of the spectrum of white light, or the seven major notes of the octave of sound).

Besides a number, each Sephira has a god-name and a word or set of words to describe what it is and means. The most common words for the first three Sephiroth (the Holy Trinity) are: (1) Crown (Power), (2) Wisdom (Word), and (3) Intelligence (Holy Breath, Spirit or Ghost).

However, since God is the All-Good, and the divine nature or expression of Good is Goodness or Love, therefore all the Sephiroth are attributes of Divine Love. The Intelligence is the receptive and formative aspect of that Love, whilst the Wisdom is the active and creative aspect. The former carries or bears the latter, just as our breath carries the words we speak. The Crown is at one and the same time the Source that is all Potential and the First Impulse or Cause.

Last, but not least, the tenth Sephira (10), called the Kingdom, represents the physical universe and all that is in it. One of its symbols is a pot or chalice (the Holy Grail) into which the other nine Sephiroth are poured (i.e. incarnated).

The names given to Sephiroth 7, 8 and 9 are not very explanatory. In effect, Victory refers to good emotion or desire—our goodwill and affection for each other. Glory, on the other hand, refers to the witty mind and good thought. Foundation refers to generation or procreation—the ability to procreate and put desire and thought into action in a good way. These three constitute the natural life-process of desire, thought and action which, when expressing the highest principles, are loving kindness, understanding and service—or, put another way, goodwill, good thought and good action; for God, Who is Love, is the All-Good, whose nature is goodness.

Victory, Glory and Foundation are the lower, psychological counterparts of the higher, spiritual principles of Mercy, Judgment and Beauty. The latter, in turn, are the spiritual counterparts or manifestations of Wisdom, Intelligence and Power.

Mercy is also known as Compassion and includes Generosity. It is associated with freedom. Judgment is the same as Perception but is also known as Severity, Strength, Rigour, Righteousness and Justice. It is associated with discipline. Both mercy and judgment, or freedom and discipline, are needed in balance with each other. The generosity of mercy can be indulgent, self-defeating, blind and powerless without the strength given it by clear judgment and right discipline. Judgment, on the other hand, can be cold, harsh and altogether too severe without the warmth and generosity of compassion. Heart and mind need to act together in harmony, and then beauty ensues. Beauty lies at the centre of the Tree of Life and signifies the manifest heart of God, the balance and harmony point of all things.

To help explain the Tree of Life and the meaning of the Holy Trinity, human models or stories have been employed down the ages. Thus, for instance, the Wisdom of the right-hand pillar is referred to as Ab (‘Father’), whilst the Intelligence of the left-hand pillar is referred to as Aima (‘Mother’). These two, Wisdom and Intelligence, are thus the Divine Father and Mother. They are the polarity of existence yet completely One in love, for they are Love. They and their love-relationship comprise the Holy Trinity—the ‘Three in One and One in Three’.

The unnumbered point, the centre of the World of Creation, is referred to as Daath (‘Knowledge’). This represents the conscious knowledge or realisation of the whole Tree of Life as it is acquired step by step, path by path, Sephira by Sephira. This knowledge is also known as illumination, which grows from dark ignorance to the light of full universal knowledge.

Besides the more universal use of the Sun and Moon to represent the Divine Parents or Polarity of life, the Sephiroth are individually symbolised by the octave of ‘sacred planets’, from which is derived the idea of each planet having its own divine intelligence or spirit or god/goddess.

Saturn is used to denote the unnumbered Sephira, Knowledge, referring to knowledge of the whole Tree of Life, which is Truth. Knowledge of Truth is also known as illumination, for our minds or souls are illumined by knowledge of truth, which knowledge is obtained only by practising truth. Such practice is called "living in truth". It is also referred to as "Truth Revealed".

All these ascriptions relate to and lie behind the science of astrology as well as the cosmology of various cultures.

The Tree of Life diagram can be depicted in two ways; the paneem or ‘face to face’ view, and the a’hoor or ‘back’ view. There are reasons for each viewpoint. The pictures in this document use the paneem view. 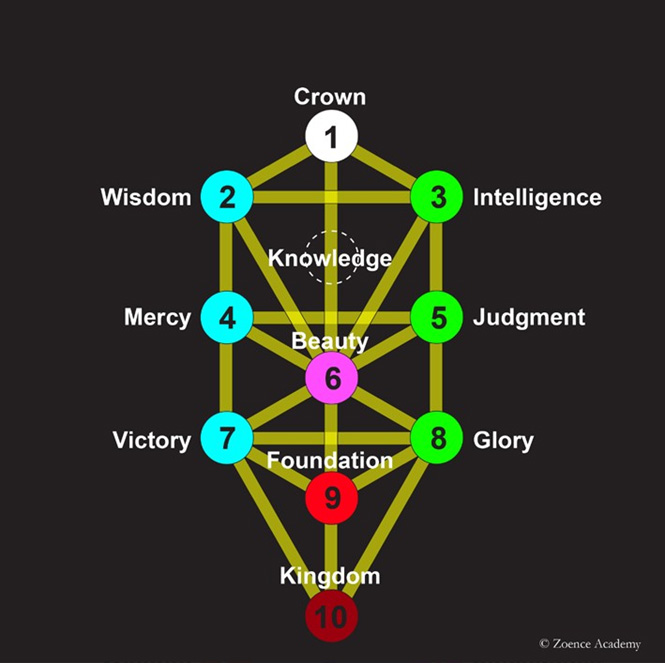 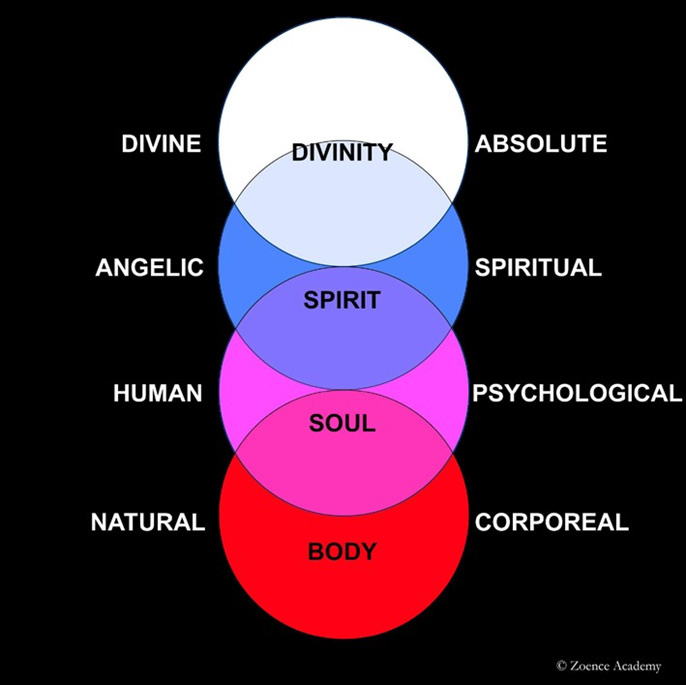 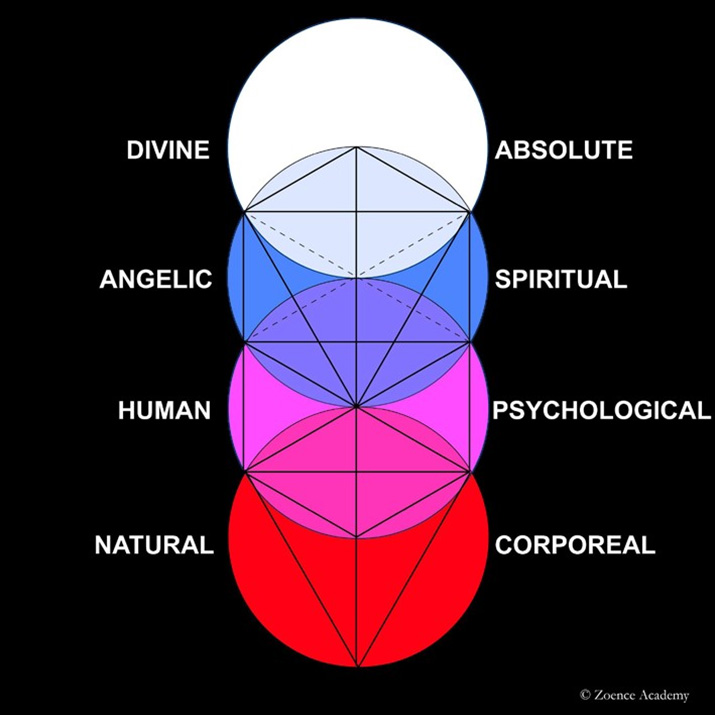 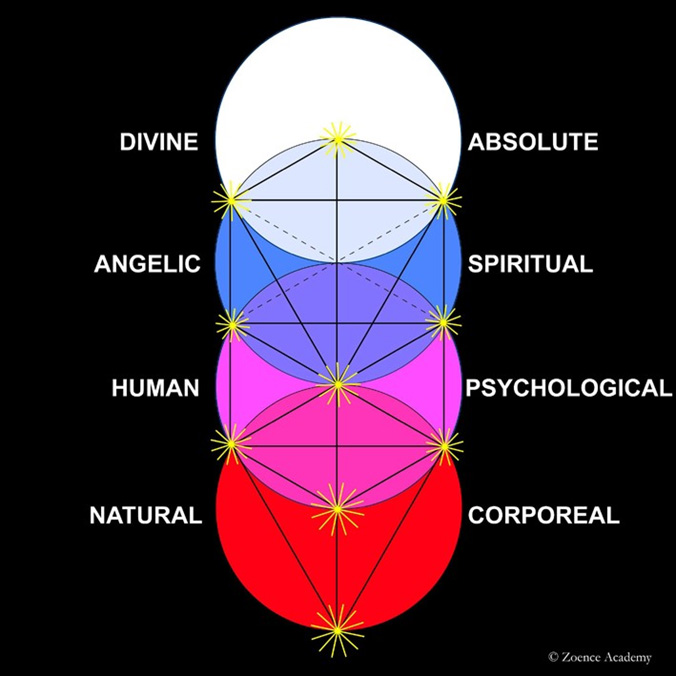 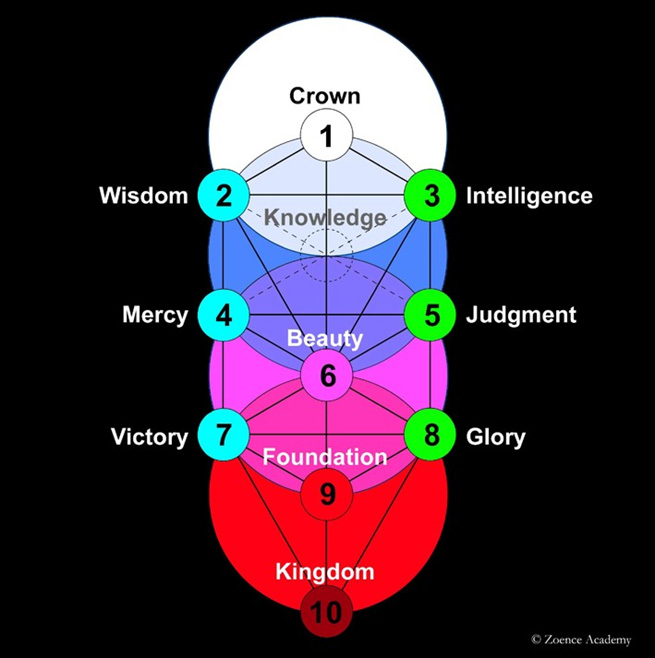 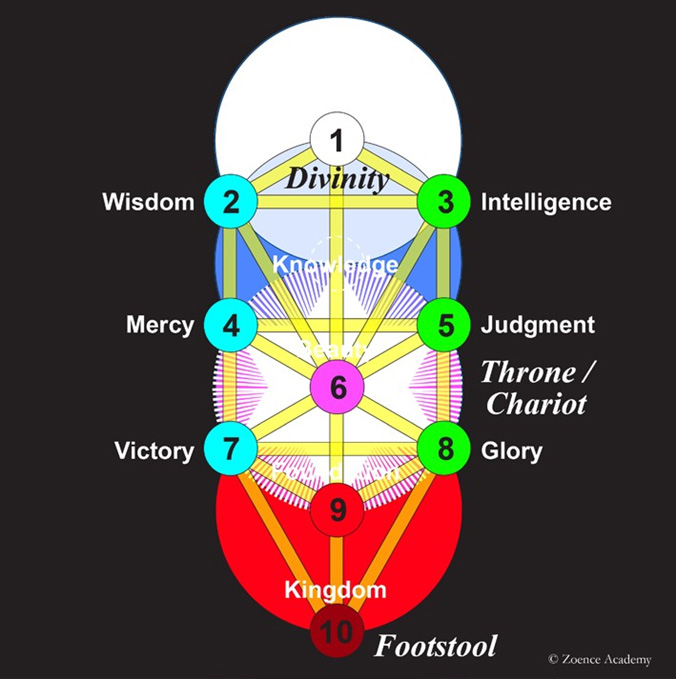 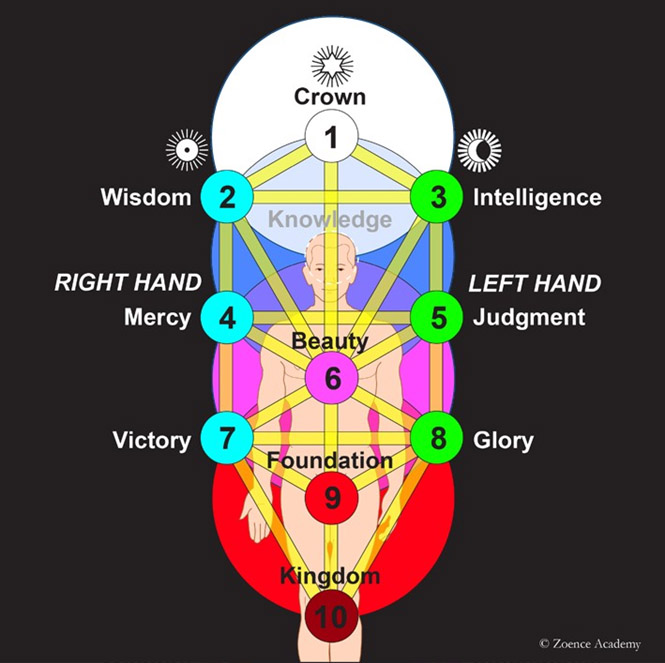 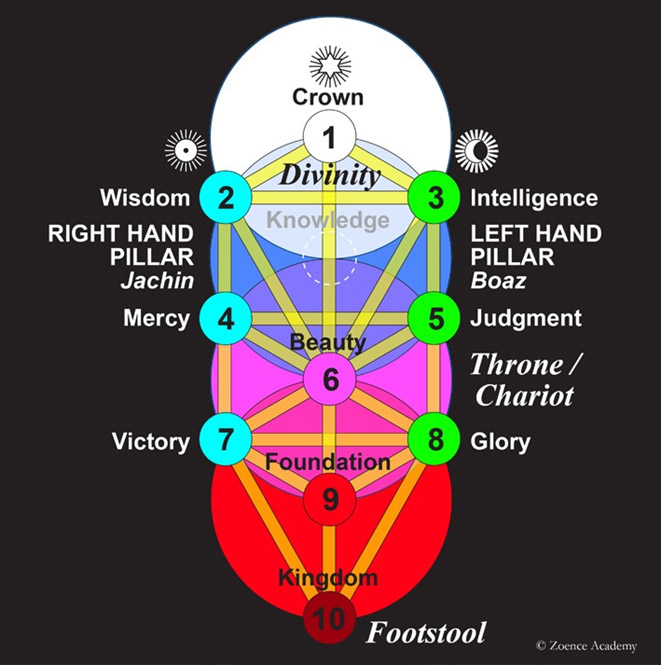 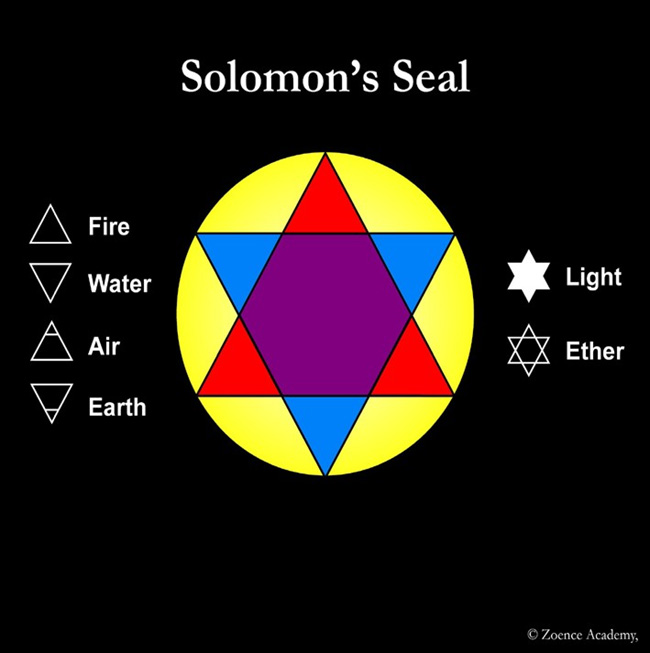 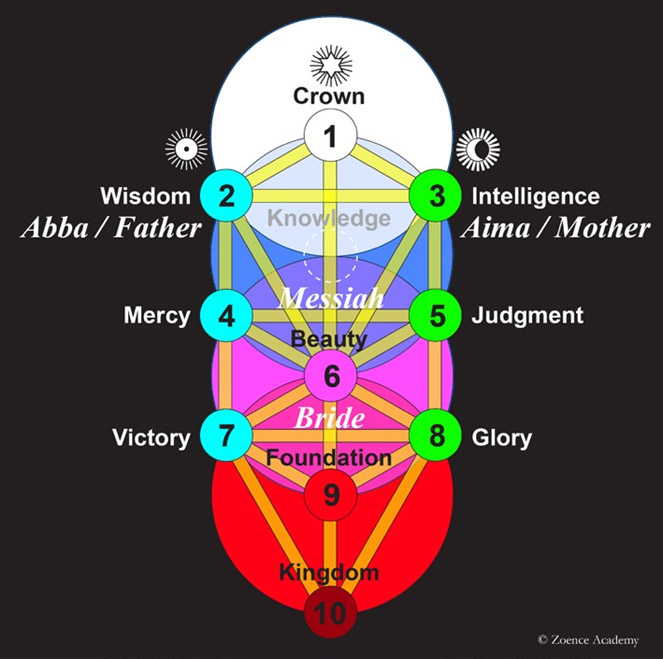 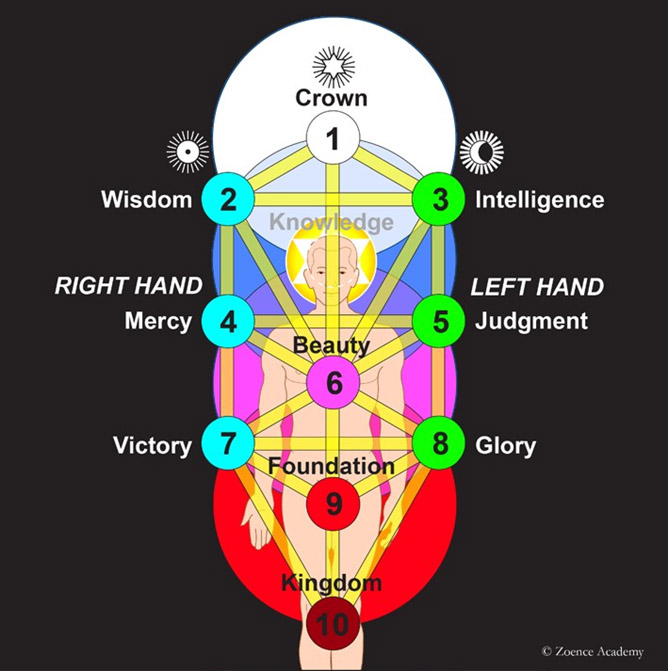 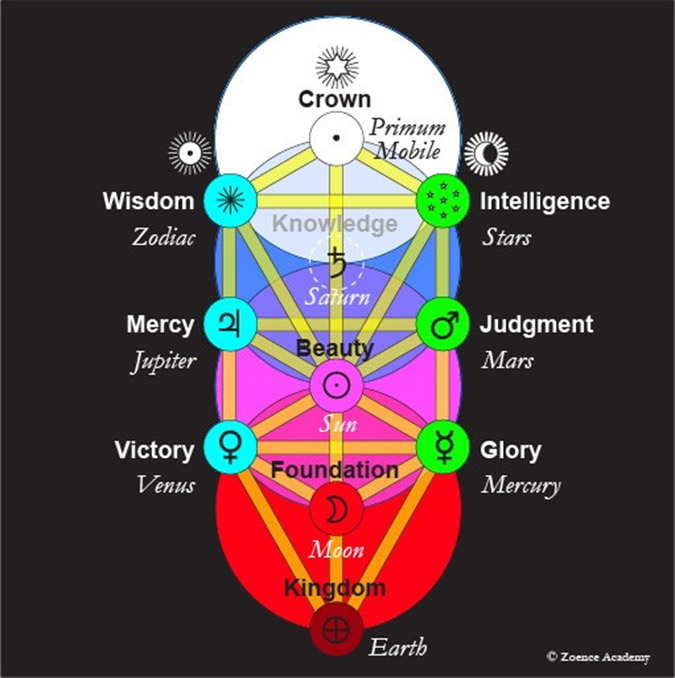