Eros (‘Love’) was the name given by the Orphic and Greek philosophers to the ‘First-born’ (Protogonus)—the first complete manifestation of Divinity. He was described mythologically as the son of Nyx (‘Night’) and Boreas (‘North Wind’), who themselves were derived from Aether (‘Spirit’) and Erebus (‘Darkness’). Eros was born from the Cosmic Egg laid by Nyx and fertilised by Boreas.

Eros shines as a great Light—the Light of the Universe. As such he was known as Phanes (‘Brilliant’), the golden-winged god of light. He was also known as Ericapaeus (‘Power’), Logos ('Word' or ‘Wisdom’) and Metis (‘Intelligence’). The Romans called him Cupid.

Although referred to as ‘He’, Eros/Phanes is both male and female. He was symbolically described as having four eyes, faces or heads, which allow him to look in any direction, the heads sometimes being represented in the shapes of various animals. He has the voice of a bull and a lion, with which he creates all things. As he burst asunder the Cosmic Egg, the two halves formed Heaven (Uranus) and Earth (Gaea). All the elements, gods, goddesses, nature, everything, was contained within and emerged from his being.

Eros is the Universal Being, the creator of all individual expressions of life. Should any individual form of life, through the evolutionary process associated with Time, reach a likeness in nature and possess the attributes of Eros, then that life form was referred to by the Greeks as the Christos ('Anointed'). This name was derived from Kheru, the Egyptian name for Horus, meaning 'Word'. Written without vowels, the Egyptian KhR is equivalent to the Greek XP (Chi-Rho): hence the monogram of Christ known as the Christogram.

The perfected individual life form that could be called Christos was described in classical myth as the younger Eros (Cupid). In terms of his mythological ancestry, he was the son of Aphrodite (Venus) and Ares (Mars), signifying the final result of the evolutionary process; but in the wider sense he was referred to as the son of the Father, the elder Eros, and one with the Father.

This younger Eros is commonly portrayed as a naked child wearing a blindfold or a youth with his eyes closed, and bearing a bow and quiver full of arrows. The bow is an ancient symbol of the loving heart, whilst the arrow signifies a ray of love-light radiating from the heart. The blindfold indicates that, to begin with, Eros cannot see clearly where he shoots his arrows, but finally, as the youth with his eyes closed, it signifies that he perceives clearly all things with the mind, using his all-seeing eye or eye of imagination ('the third eye').

In the mystery schools, the younger Eros was known as Bacchus or Dionysus, whose parents were Zeus and Persephone or Semele. He was usually portrayed holding a fennel staff tipped with a pine-cone, called a thyrsus. He was also known as Mercury, the name being derived, like that of Christos, from the Egyptian Maa Kheru ('True Word'). Instead of the thyrsus, Mercury bears the caduceus. Both thyrsus and caduceus represent the spine of the human being, or the central pillar of the universe, up and down which move the vital energies of life and consciousness. 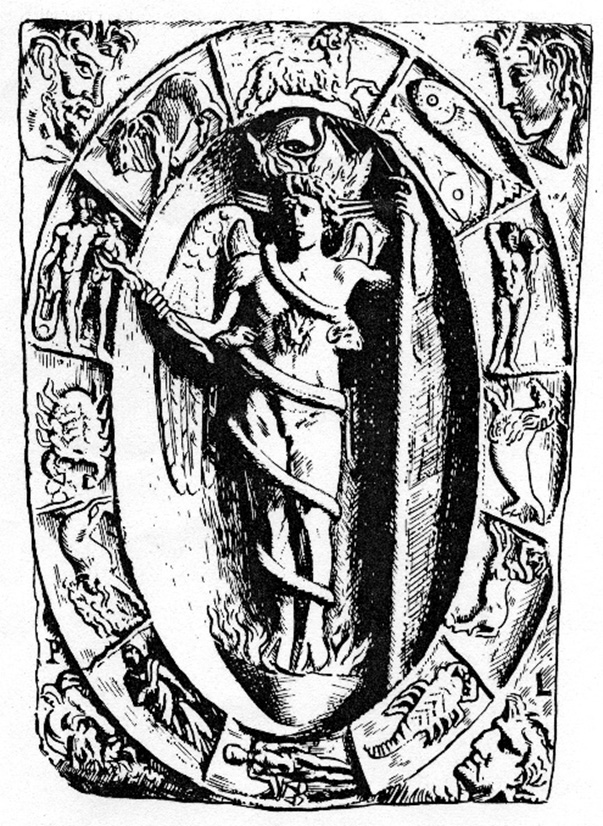