The twelve-fold zodiac is a fundamental property of the archetypal Wheel of Life, wherein each quarter or alchemical element of the Wheel expresses the triune nature of the Holy Trinity. The result is a division of the Wheel of Life into twelve equal sectors, each of which has a particular and unique nature and purpose.

The word zodiac, meaning ‘wheel of life’ (from the Greek words zoe, ‘life’, and diakos,‘wheel’) is traditionally used to refer to the Wheel of Life in its twelve-fold division. Knowledge concerning the nature and purpose of each sector has been passed on to us in the wisdom traditions by means of a system of symbolism, wherein each sector of the Wheel or Zodiac is represented by a ‘hieroglyph’ or ‘creature’, each one associated with mythological stories and sub-sets of symbols, and thereby conveying layers of meaning. For this reason the Greek zodiakos can also mean ‘wheel of creatures’, wherein a slightly modulated form of the word zoë (from which we derive the word zoo) means ‘creature’.

It is important to realise that the Wheel of Life or Zodiac is essentially archetypal. That is to say, it exists in its original as a divine or spiritual thought-form. To this is added the knowledge concerning the Wheel that has been acquired over the millennia of human evolution, together with a language to convey that knowledge, thereby superimposing a human thought-form upon the divine archetype. The divine archetype manifests everywhere, in every form of life, not just in the heavens; but it is in the sky that we are generally first made aware of it. The association of stars and constellations with the fundamental imagery of the Zodiac is almost purely a memory device, so that we can remember and pass on to others the pattern, symbolism and meaning of the Wheel of Life, together with its relationship to time and space and the evolutionary life process.

The time aspect is of vital importance to us. It includes the spatial aspect as well, as time and space are two sides of the same coin, as it were: the one cannot exist without the other, and each relates to the other. The most fundamental marker of time for us is the Sun. Our daily cycle arises because of the spin of the Earth upon its axis, and our annual cycle occurs because of the movement of the Earth about the Sun; so we tell the time by means of the position of the Sun in relation to the Earth. However, for larger time cycles the traditional means is by noting the position of the Sun in respect of the celestial zodiac, and this constantly-moving, changing position also has a bearing on the annual cycle of time.

The Sun appears to us on Earth as if it is moving in a great circle in the sky about the Earth. This Sun's path is called the ecliptic and it shows the Sun in its relationship to the stars, and thus their combined relationship to us, as seen from Earth. The ecliptic passes through twelve particular constellations, each of which is symbolised by a zodiacal creature. It is these that give their names and symbolism to the twelve equal sectors (or ‘signs’) of the zodiac, even though the constellations themselves are neither of equal size nor evenly spaced from each other. It is, thus, an approximate relationship but suffices for its purpose.*

In the course of one year the Sun moves through all twelve signs of the zodiac. This is another way in which the annual cycle of time can be calculated; only it is not entirely accurate, especially over a long period of time, the reason being the phenomenon known as the Precession of the Equinoxes.

As the Earth moves in its eliptical orbit around the Sun, it spins on its own axis. These two movements give rise to the annual and daily cycles of time. However, the Earth also ‘wobbles’ on its axis. The effect of this ‘wobble’ is that the celestial poles of the Earth (i.e. the North and South Poles of the planet projected out to the imaginary celestial sphere surrounding the Earth) move in a circle around the centre of the zodiac. Without such a ‘wobble’ the Celestial North Pole, for instance, would coincide with the centre of the zodiac (the same is true of the Celestial South Pole, but seen in terms of the southern hemisphere). The centre of the zodiac is known as the Occult Pole.

The planetary wobble is such that the Celestial North Pole takes about 25,920 years to make a complete circle around the Occult Pole. The effect of this is to make the Sun appear to slowly move its position with respect to the stars and zodiac as observed on a chosen day of the year. That is to say, the Sun's position on the ecliptic at the winter solstice, for instance, will move one degree along the ecliptic in the course of seventy-two years. In 2,160 years the Sun's midwinter position will have moved 30 degrees, which is one whole sign of the zodiac. In the course of 25,920 years the midwinter Sun will have completed a complete circle around the ecliptic, having passed through all twelve signs.**

This period of 25,920 years is known as a Great Age, whilst each of the twelve subsidiary periods of 2,160 years is referred to as an Age. Like the hand of a clock, the Sun tells us, in this manner, which time of the Great Age we are in.

European and Western astrologers usually use the position of the Sun at the spring equinox as the marker of time. In the Hindu tradition the autumn equinox is normally used. Because this apparent movement of the Sun through the zodiac is in the opposite direction to its day-to-day movement through the zodiac during the course of a year, the phenomenon is called ‘the Precession of the Equinoxes’.

However, the most exact timing is given by the position of the Sun at the solstices, which is what certain esoteric schools of wisdom have traditionally used.*** Moreover, the solstitial axis from the midwinter to midsummer position of the Sun on the ecliptic not only passes through the Occult Pole but also through the Celestial North (or South) Pole, which helps to identify it in the sky, especially when there is a star marking the Celestial North Pole, as is now the case.

But where does the zodiacal division of the ecliptic begin and end? How do we know when each Age, or a Great Age, begins and ends? Because the stars are in slow but continual motion, they can only be taken as approximate aids in marking the divisions of the ecliptic and hence of time. However, there are two fixed markers. These are the two points on the ecliptic where the equator of the Milky Way galaxy (our galaxy) crosses the ecliptic. These two points form the cusps of Gemini-Taurus and Sagittarius-Scorpio. The axis between them forms the major axis of the zodiac. The rest of the twelve divisions or signs of the zodiac are laid out from these markers, and in particular from the Gemini-Taurus cusp. This point is called the Alpha-Omega (or ‘AA’) point, with Taurus being known traditionally as the first sign of the zodiac and first Age of the Great Age. The Ancient Egyptians called it the ‘First Time’, with the finger of Orion (Osiris) pointing exactly to it, and the ox or bull (i.e. Taurus) gave rise to the hieroglyph that eventually became the letter A or Alpha.

It is also known now that the start of a Great Age was traditionally understood as being when the summer solstice Sun is exactly on the cusp of Gemini-Taurus, crossing the galactic equator and moving from Gemini into Taurus. The corresponding midwinter Sun will be, therefore, on the cusp of Sagittarius-Scorpio, and this is about the closest the Sun ever gets to the galactic centre, as it ‘appears’ from Earth. This is said to open up a channel between the heart of the galaxy and the Earth, via the Sun, which allows a cosmic baptism of energy and light to pour upon us. This, in fact, happens twice in each Great Age (i.e. the other time is when the midwinter Sun is on the Gemini-Taurus cusp and midsummer Sun is on the Sagittarius-Scorpio cusp); but it is the Alpha-Omega time of a Great Age that is the most significant, rounding off the death of the old Great Age and giving birth to a new Great Age.

These baptisms of energy from the galactic heart are very real, being physical (i.e. bursts of cosmic super-rays) as well as metaphysical. Sometimes they have caused great disruptions to the Sun and solar system, seriously affecting the atmospheres of the planets, including our own. It appears that they have been the times of the great as well as the lesser cataclysms. Since their time-cycle recurrence is approximately every 12-13,000 years, it would seem to mean that the so-called wobble of the Earth's axis is actually the Earth's resonance to the cyclic waves of energy issuing from the galactic core.

We are in the midst of one such cosmic baptism now, as our midsummer Sun is right on the Gemini-Taurus ‘AA’ point and we are beginning a brand new Great Age. (See also ‘The Phoenix Cycle’ and ‘The Great Ages’ information sheet.) 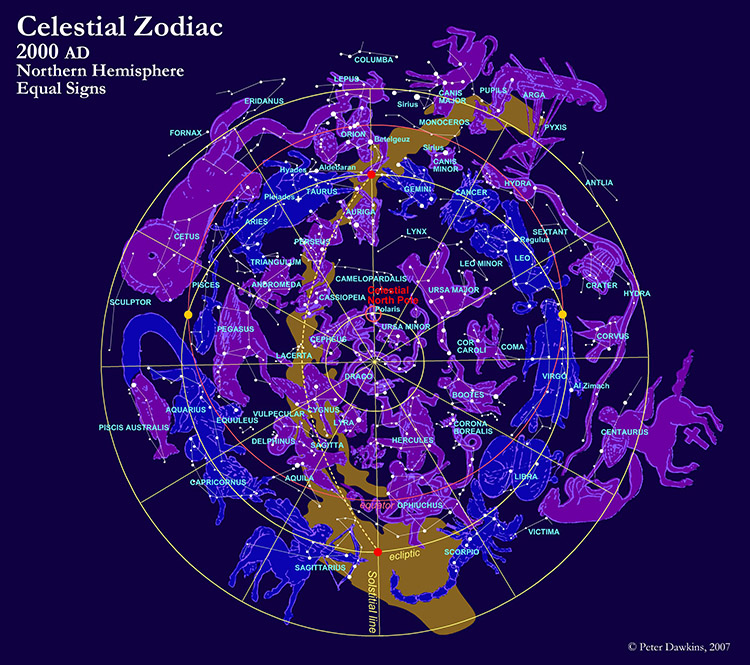 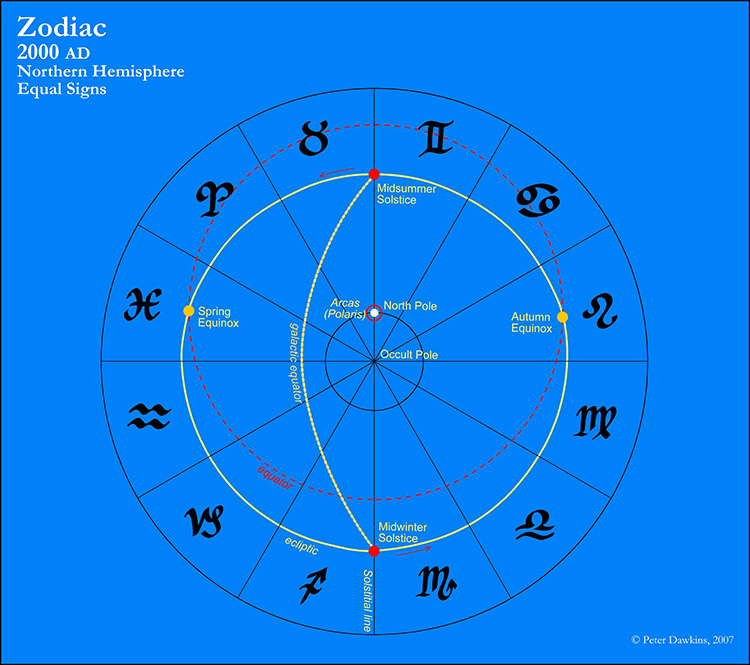