Besides the Solar Breath Cycle of 13 ‘breaths’ marked by 13 two-week or 28-day periods (plus a ‘Day out of Time’) per year, there are also what are known in tradition as the Nine Great Breaths which occur each year and which produce the biblically well-known 40-day periods. These are directly associated with inspiration from the spiritual aspect of the Sun (i.e. the divine Light) and involve the Holy Grail or Vessel of Light. This is perhaps best illustrated by the Celtic story of the great goddess Ceridwen and her magic cauldron.

Ceridwen ('beautiful/holy song/poetry') is the goddess of rebirth, transformation and poetic inspiration. Her  cauldron is kept in a revolving four-cornered castle that has three names—the Castle of Revelry, the Crystal Castle and the Castle of Riches. The castle sits on a high conical hill and has a circular moat surrounding it. Nine maidens attend the cauldron, each in turn stirring the brew and breathing upon the fire for forty days, so as to keep the brew at the right temperature whilst the goddess gradually adds the natural ingredients at appropriate times of the year. In this way, the nine maidens help prepare a potion that reaches its perfection at midwinter, the end of the year. To drink of this potion bestows Awen, poetic inspiration and knowledge of truth (i.e. illumination), as well as being healing and life-preserving.

The four-cornered castle on its hill, surrounded by the ring of water, is illustrative of the Wheel of Life. The cauldron represents the cycle of the year consciously experienced; the potion is the knowledge gained as a result of that experience. The nine maidens symbolise nine spiritual impulses or ‘breaths’ that occur at forty-day intervals in each annual cycle. The moments of inspiration are known as the Nine Gates of Inspiration.

The cauldron or holy grail is also symbolic of the land. In Britain it is represented by the landscape zodiac of Britain, as well as lesser-sized landscape zodiacs. But every zodiac is a chakra, and so landscape temples with their chakra systems are also cauldrons of poetic inspiration or holy grails. Indeed, one way of understanding the nine maidens who tend Ceridwen's cauldron, stirring its brew and breathing on the fire beneath the cauldron, is that they each represent the development of a Sephirah on the Tree of Life. As the year progresses, the Tree is metaphorically climbed, Sephirah by Sephirah, until Sephirah #1 at the crown of the Tree is reached. There the goddess is united with her god, and, over the 5-day midwinter period (20-24 December), the mystical marriage of the bride (the soul) with the spirit takes place, a great blessing and illumination occurs, and the radiant child of light is born.

Sephirah #10 at the foot of the Tree of Life symbolises both the kingdom and the bride. The bride's ascent up the Tree is still enacted out symbolically in church wedding ceremonies, wherein the bride moves up the church, chakra by chakra, from the western end, the root or base of the church, to join her groom at the eastern end, where they are married and blessed at the high altar in the crown of the church.

In Welsh stories of Ceridwen, the goddess' husband is referred to as the giant Tegid Foel, a Welsh symbolic name meaning teg(it), 'beautiful', foel, 'bare hill'. In other Celtic myths, Ceridwen is symbolised as the great white sow who flies through the air and, wherever she drops her litter, a druidic mystery school is established. Her husband is known as Arthur ('Truth'), the boar of Britain, otherwise known to the Celts as Hu ('Shining mind'). Ceridwen's alternative name is Guinevere (Celtic Gwen-ouvir, ‘white dragon’ or ‘pure intelligence’; Welsh Gwen-hwyfar, ‘white spirit’). She is the intelligent dragon energy of the land, and of ourselves, known in the Vedic tradition as the goddess Kundalini. Her rising up the Tree of Life is equivalent to the serpent raised upon the Cross of Light, the Cross of Truth. In accomplishing this, Truth becomes known and is thereby revealed.

The Ancient Egyptians likewise recognised a 360-day year, and their tradition describes the five intercalary days as extra days won by Thoth from the moon-god Khonso, so that Nut (whom Thoth loved) could give birth to five children. Osiris was born on the first day, Harmachis (Horus) on the second day, Set on the third day, Isis on the fourth day, and Nephthys on the fifth day.

The Qumran Community of Essenes used a 360-day solar calendar which consisted of 12 months each of 30 days. However, the five intercalary days were disposed over the year so that an additional day was given to every three months and the fifth extra day to the end of the year (i.e. at the Midwinter Solstice).

In North America these special moments in the year are celebrated by the Native Americans with their Ghost Dance, danced in a circle around a Peace Tree. The Peace Tree is planted at a significant place of power and represents the axis of the world. 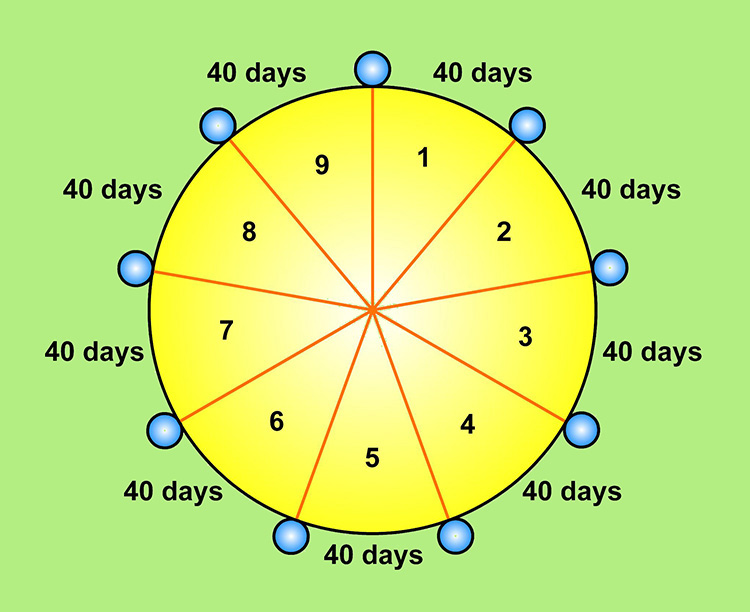