The Sun continually ‘breathes’ its energy upon us, bathing the world in its prana or magnetically-charged light-breath. This breath, referred to by modern scientists as the solar wind, has its own cycle and rhythm which is likened to an inbreath and an outbreath.

In terms of its average speed of about 400 km/sec, the solar wind takes approximately seven days to reach the Earth. Moreover, because of the Archimedean spiral shape of the interplanetary magnetic field (IMF) carried by the wind and the effect on the Earth of the rotating heliospheric current sheet created by the opposing polarities of the IMF’s northern and southern hemispheres, the Earth experiences regular, periodic changes in the polarity of the IMF. These polarity changes occur two or more times per solar rotation. That is to say, because a solar rotation takes on average about 27 days, the reversal of polarity in the IMF as experienced by the Earth occurs on average approximately every two weeks, and can be every week. This changing of polarity is, in terms of the solar wind, like an ‘outbreath’ and an ‘inbreath’.

The division of the year into seven-day weeks, with the weeks designed to operate in pairs, is understood to be in recognition of this rhythmic flow of the Sun’s energy, which in turn is seen as being a physical manifestation of the seven divine ‘Days’ in which the universe is created and brought to perfection by means of the ‘Breath of God’ or ‘Holy Spirit’ that bears the ‘Word’ of God. That is to say, the Seven Days of Creation is perceived as the archetype lying behind the movement and rhythm of the solar wind as it bathes our world with its magnetised ‘breath’ of light—the wind being analogous to the divine Breath, the magnetism to the divine Word, and the sunlight to the divine Light.

In one year of 365 days there are 52 weeks, 13 to each season, plus one extra day. From this comes the term ‘a year and a day’ which is still used in legal matters in the UK. The year in this context refers to a cycle of 52 weeks or 13 complete ‘solar breaths’. The four-week, 28-day period of one solar breath, consisting of a two-week inbreath and a two-week outbreath, is counted as one month in the Druidic 13-month calendar. Each of these monthly breaths can also be subdivided into a two-week male and a two-week female breath, with each inbreath or outbreath occupying a week.

The extra day is known as ‘the Day out of Time’, which the Druids in Ancient Britain used to celebrate annually at the Winter Solstice as Mistletoe Day, lying between the old year and the new, and belonging to neither. The standard pack of playing cards, containing fifty-two cards in four sets, plus a Joker, was designed to represent this solar cycle—playing with cards being a parody of the game of life. The Joker is the Lord of Misrule, whose special day is the ‘Day out of Time’.

In effect though, despite the symbolism associated with midwinter, the ‘Day out of Time’ is both a moveable feast and invisible, because the flow and rhythm of the solar wind and the weekly cycle does not stop for the extra day in the year: hence the Joker is a ‘wild card’—it can be played whenever we choose. What actually happens is that the 52-week annual cycle of the solar breath creates an apparent retrograde effect of the extra day as the years go by. That is to say, the extra day moves backwards in the calendar, occurring for instance on December 23rd in one year, but on December 22nd the next year, and December 21st the year after that. Except during leap years the extra day moves back a day in the calendar each year; in a leap year it moves back two days. In approximately 270 years it will have completed a whole retrograde cycle and will occur on December 24th, ready to begin a new revolution. In this way it is connected with the Phoenix Cycle, for 270 years is one-eighth of an Age, or one-half of a 540-year Phoenix cycle.

In terms of festivals, the Solar Breath cycle is celebrated once a week, primarily on either Sunday or Saturday, and once a year, at the Winter Solstice. Sunday, the day of the Sun, celebrates the birth of Light, the Alpha of creation and evolution. Saturday, the day of Saturn (the Sabbath), celebrates the ultimate enlightenment of all creatures, when the wisdom and love of the Light is fully known, appreciated and enjoyed, which is the Omega of all creation and evolution. The Winter Solstice, acting as the ‘Day out of Time’, celebrates both the Alpha and the Omega. 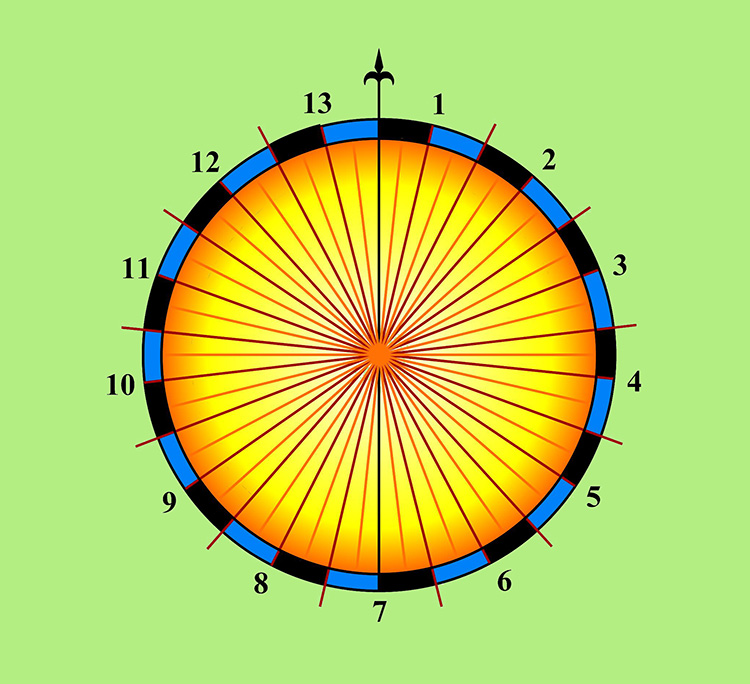