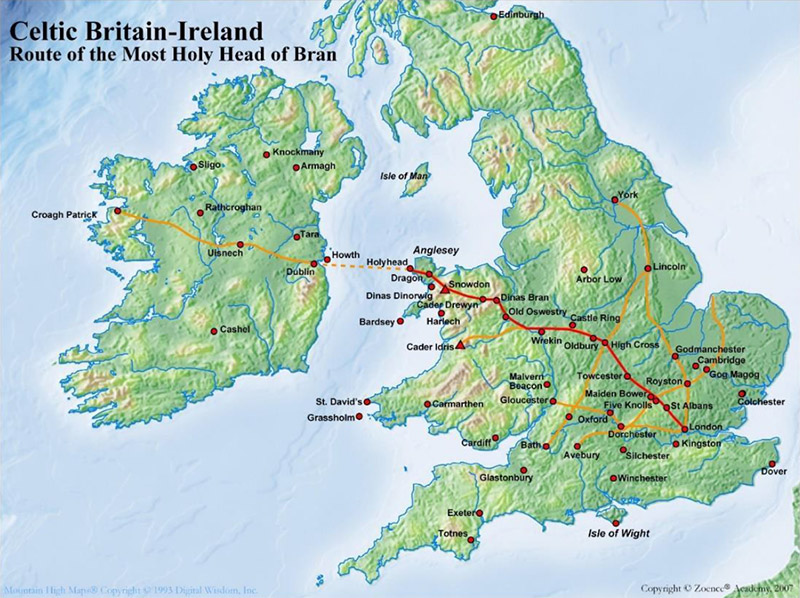 A Picture Pilgrimage of the Route of the Most Holy Head of Bran: Tower of London to Caer Arianrhod, Wales

After many years of preparation and research along the Route of the Most Holy Head of Bran, we made a full pilgrimage from the Tower of London on Bryn Gwyn, ‘the White Mount’, to Caer Arianrhod in North Wales.

Sarn Wydellin, which stretches from Holy Head in Anglesey to London, formed not only the spine of Ancient Britain but also what is referred to in myth as the Way of the Most Holy Head of Bran. This can be seen in the map above as the ‘red line’. This and the yellow lines are original Celtic roads.

You can find a version of the myth of Bran here 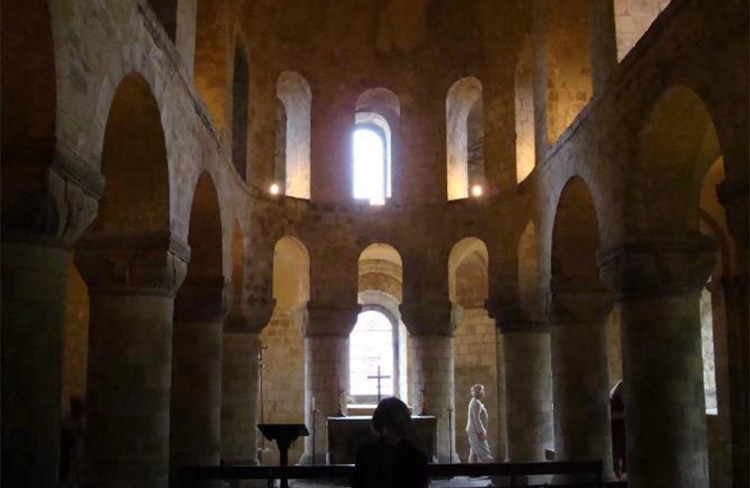 Our starting point – the chapel of St John the Evangelist in the White Tower at the Tower of London – the central and original tower, built by William the Conqueror, which stands on the Celtic Iron Age burial mound known as Bryn Gwyn (‘the White Mount’) containing the head of Bran.

St Albans Abbey Church, now a Cathedral, marks the spot where St Alban, the first Christian martyr in England, was beheaded and where his relics were later interred.

St Michael’s church is nearby, the burial place of Sir Francis Bacon, who was given the title Viscount St Alban.

Gorhambury estate, with Bacon’s Mount, reputedly Francis’ temple of meditation which was built in a special position in the geomantic layout in the estate.

Towcester’s Mount – now with a spiral pathway winding its way to a flat-topped summit, with the river and local wetlands restored. The pathway is created as a time line, honouring the ancestors. The pathway is marked with inscribed plaques, walking its history from a Celtic burial mound through the Norman period to the present day.

This is where the Fosse Way (Sarn Fosse) and Watling Street (Sarn Wydellin) cross at the centre of the landscape zodiac of Britain. They were Celtic roads which, according to British tradition, were laid out in the 5th century BC by the famous high kings, Molmutius and Belinus.

Nearby, Harts Hill oversees Watling Street, and is one of the possible burial-sites of a King Arthur.

Mancetter is close by which could be the site for the defeat of Boudicca and one of her spiritual centres. 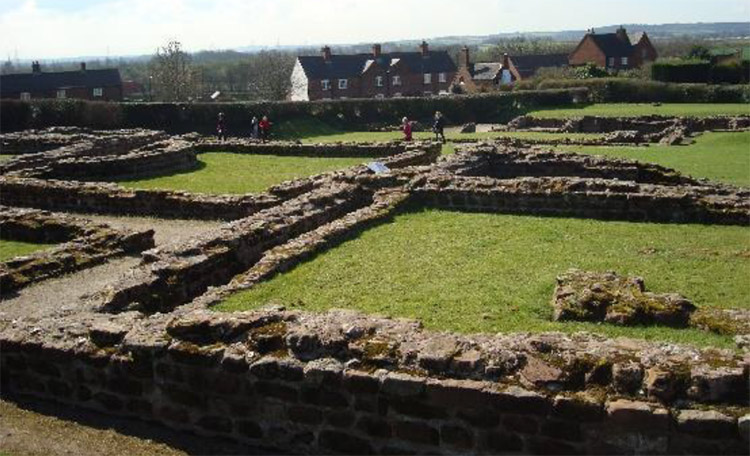 Wall, or Letocetum, was once an important staging post on Watling Street, on the site of a Celtic Fort – maybe a Bran Castle?
(See ‘The Holy Kingdom’ by Adrian Gilbert)

When Wall was abandoned as a settlement, Lichfield became the focal point for the area. 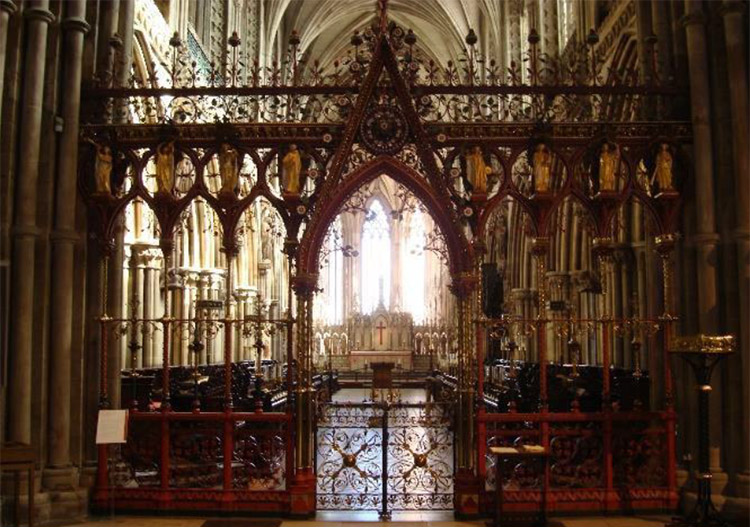 Lichfield Cathedral
This is a beautiful Gothic Cathedral with a tradition of healing. It holds the relics St Chad with a separate chapel for his head – maybe a reminder of Bran’s head? Maybe the reverence of St Chad’s head is a Christianisation and substitution for the previous reverence of Bran’s head?

This area still has a powerful spiritual presence – the spirit of place or ‘Kindly Luminous Beings’. 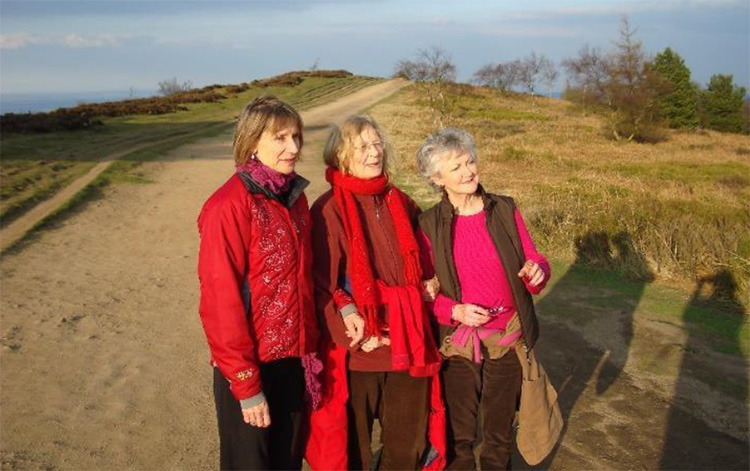 Happy Pilgrims! The Wrekin was a special mountain to Sir George Trevelyan who named his Trust after it – he used to see the mountain from his study window. On the top are the remains of an Iron Age or Celtic hill fort with magnificent views around. A place of inspiration and poetry…. 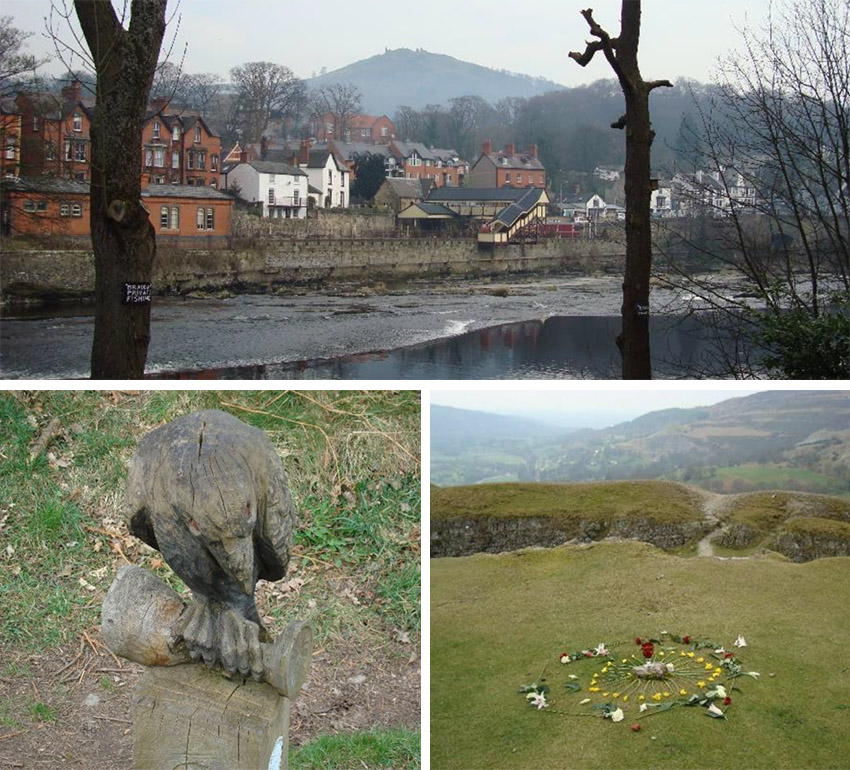 A view eastwards to the steep-sided hill of Dinas Bran (Ravens Hill). This hill is crowned with the 13th-century castle which is on the site of an Iron Age hill fort, the original castle of the British King Bran or Bron, with his connections to Joseph of Arimathea and the Grail – a true Grail Castle. The King who built the 13th century castle also founded the nearby Valle Crucis Abbey.

This is a sculpture of a raven on the ascent to the summit of Dinas Bran. The Raven is a symbol of Bran. (The Ravens at the Tower of London, are still brought from Anglesey – the story going that if the Ravens of the Tower leave, then Britain will fall.)

Our mandala on the top of Dinas Bran looking back to London. This is a place of the meeting of energies from London and our next port of call, Snowdon. 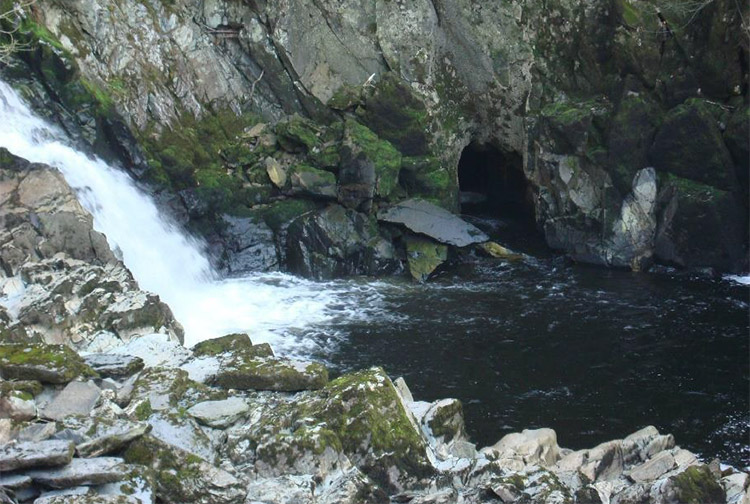 Snowdon has many gateways and guardians, and on our journey we honoured three guardians. One such guardian was at Conwy Falls, by the Fairy Glen. It was a place of challenge–
What was our intent?
How do we conduct ourselves as pilgrims and people?
What is the balance between justice and mercy?
What is the myth of Bran and Branwen telling us? 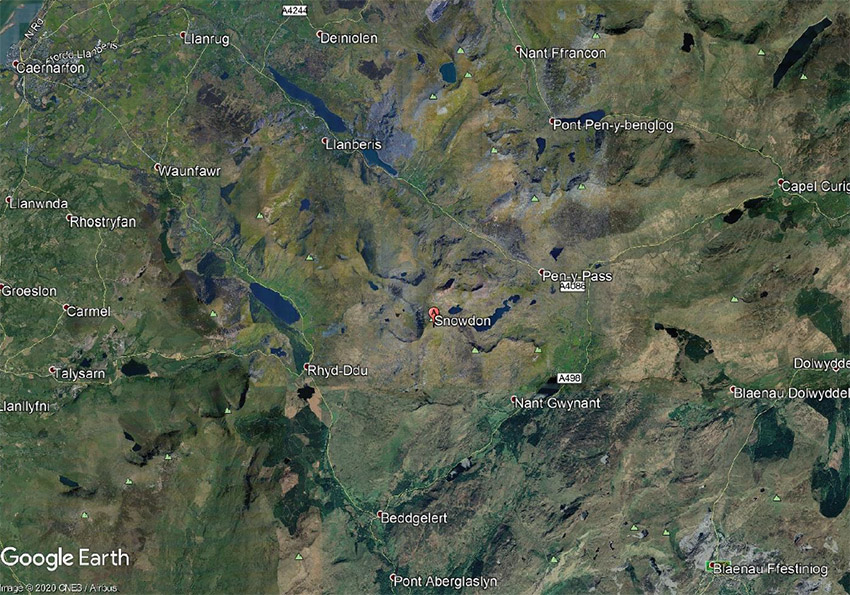 On our research trip, we felt very strongly to honour the rivers and lakes that encircle Snowdon – as if Arianrhod and her silver wheel was embracing Snowdon. Snowdonia in Welsh is Eryi, the Eagles Lair. So, we have travelled from the depth of Bryn Gwyn, the White Mound, to Eryi, the Eagles Lair… 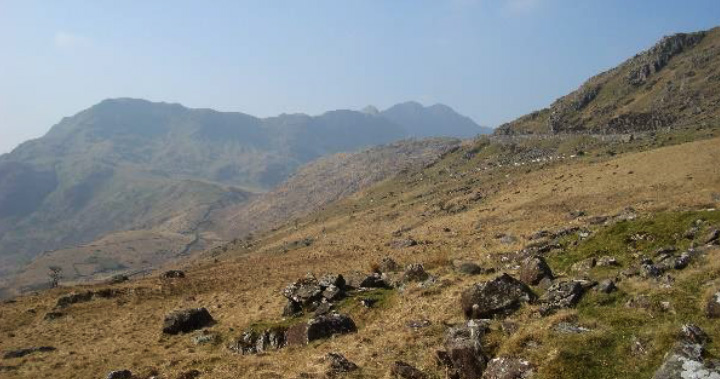 Snowdon from the Pyg track
(Pyg from the initials of the hotel Pen-y-Gwryd which hosted the early mountaineers before they went off to the Himalayas or the Alps. They go a very good cream tea and it is fascinating to see all the climbing memorabilia.)

At the beginning of our pilgrimage on Snowdon - first things first – a pilgrim washes their feet – a time of dedication and reflection on the purpose of the pilgrimage. An offering of love and celebration in nature.

Our destination was a lake named Llyn Llydaw in the heart-bowl of the mountain. This lake is reputed to be the home of Viviane, the Lady of the Lake in Aruthurian legend – or maybe this is where Arianrhod and the god Lleu (Light) meet……… 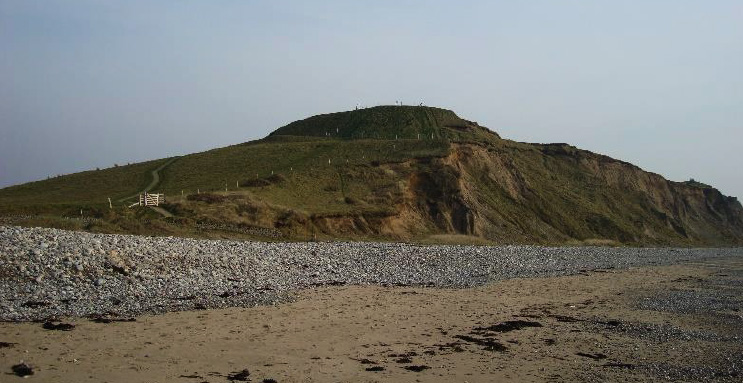 Dinas Dinlle – Cair Arianrhod
Our journey culminated at Dinas Dinlle, on the coast of the Irish Sea. From the hillfort, at low tide, you can see Caer Arianrhod or Arianrhod’s Palace as a rocky outcrop in the sea. This is midway between Anglesey to the north and the Llyn Peninsular to the south, where the energy line from Uisneach crosses the coast on its way to High Cross – the Gold route.

From this viewpoint you can see the landscape of Llyn Peninsula, Caer Arianrhod and Anglesey, which can symbolise the triple goddess. We celebrated the Affectionate Alliance between Britain and Ireland in friendship and love, with a fire ceremony on the beach, with offerings to the sea.

Bardsey Island
This is one of the resting places of the 13 Hallows of Britain – waiting with Merlin to rise again in love in service of the land.

A rainbow over Anglesey, Ynys Mon, the Mother of Wales – the last strong hold of the Druids.

Barclodiad y Gawres on Anglesey – the Giantess’ Apron, in myth is the place of marriage of Branwen and the King of Ireland. 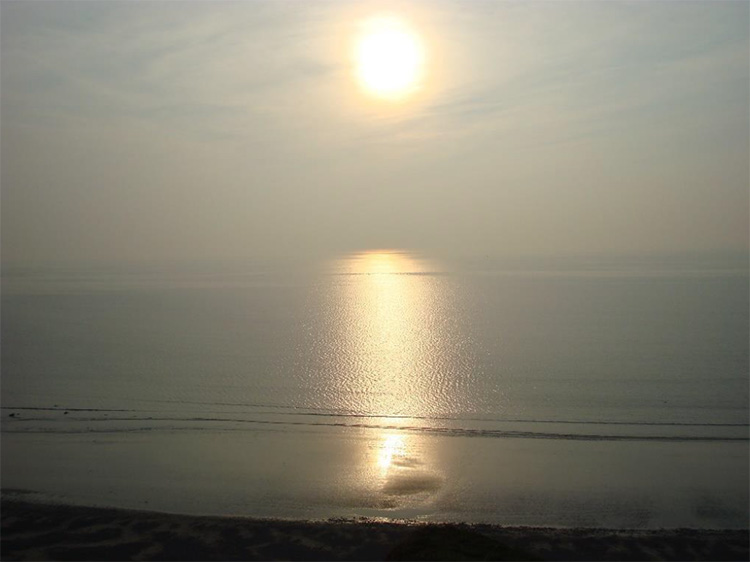 A fitting finale of the whole pilgrimage – a sunset in the mist, shrouding the horizon, making heaven and earth merge together in mysterious light, enabling the setting sun to create a magical path of golden light across the water between Britain and Ireland.

In Beinsa Douno’s words:
Love judges not, it is not limited;
It does no harm to anyone.
Its flame is sacred; it burns all that is impure,
Melts all that is pure and turns it into gold.